Posted at 14:36h in Community Revitalization by The Intersector Project 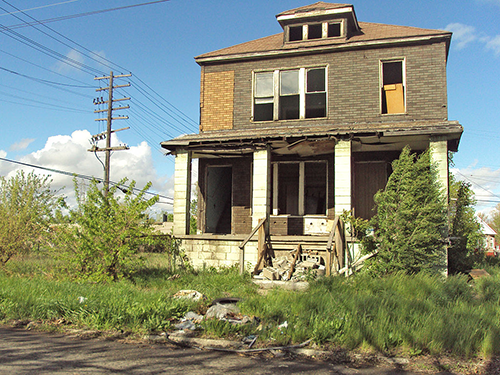 Last year the Detroit Blight Removal Task Force published a 341-page blight-fighting plan, the result of extensive cross-sector collaboration to assess the problem and offer measures for how to tackle it. The task force began with Glenda Price, President of the Detroit Public Schools Foundation, Linda Smith, Executive Director of the U-SNAP-BAC community development corporation, and Dan Gilbert, billionaire businessman of Rock Ventures and Quicken Loans, Inc. But it quickly became clear that to identify approaches and solutions to such a large problem, one that had plagued the city since the Great Depression and had only become worse in recent years, this group needed additional perspectives.

Deb Dansby, a VP at Rock Ventures, remembers, “everybody just looked at each other and said, ‘Nobody in the room is an expert on this, and nobody in the country is an expert on this at the scale that we have to deal with in Detroit’.” So the Task Force welcomed 13 more partners from across the public, private, and non-profit sectors.

The drafting and publication of the blight removal plan is an example of a successful intersector collaboration, one that incorporated many of the tactics we highlight in our Toolkit. The partners worked to Build a Common Fact Base on blight, bringing diverse perspectives to a common understanding of “blight,” which can be interpreted in many ways. The collaboration prioritized information sharing and took a data-driven approach to mapping blight throughout the city to assess the scope of the problem in a comprehensive way that studies by previous city administrations had been unable to do. “It was a pretty quick epiphany that we needed to gather as much information as we can on what is going on already in [the city]…How do we get smart about it before we ever try to solve it?” explained Dansby.

“It was a pretty quick epiphany that we needed to gather as much information as we can on what is going on already in [the city]…How do we get smart about it before we ever try to solve it?”

Dansby took on the role of of managing the collaboration, serving as a point person for the various groups involved and as project coordinator for the collaboration. “One of the core intents of a blight elimination plan really should be trying to better coordinate existing capabilities and resources,” said Danielle Lewinski, Vice President and Director of Michigan Initiatives for the Center of Community Progress. The Task Force and the resulting survey and plan exemplify the power of partnership and collaboration to tackle an issue that has plagued Detroit for years.

“One of the core intents of a blight elimination plan really should be trying to better coordinate existing capabilities and resources.”

As we have highlighted on our blog and in our case studies, cross-sector collaboration has been common in tackling a variety of complex issues in Detroit. The construction of the M-1 Rail, for example, is an intersector collaboration that is about a year away from completion. And while the rail line’s primary purpose may not be to eradicate blight, it has already shown promise in this area, with housing developments already being built along the Woodward Avenue route.

While the drafting of the Detroit Blight Task Force plan was the result of a successful collaboration, the implementation of the plan, which ambitiously hoped that the city could get rid of blight in five years, has not been as successful, reports the Detroit Free Press. The intersector collaboration that offered recommendations for blight removal across the city did not carry through to the implementation, and the task of carrying out residential demolitions, a centerpiece of the plan, fell to the City of Detroit “as abundant savings from the bankruptcy reorganization did not materialize and federal funds for the job are now drying up in a tight city budget.” The project could run out of funds of as early as the end of this summer.

Interestingly, a non-profit, the Detroit Blight Authority, tried to help with demolishing houses and clearing vacant lots before being asked to stop by Mayor Mike Duggan’s administration, which said that the non-profit’s scale was not large enough to be helpful and that the Mayor wanted to coordinate all blight efforts under a central authority. But with a variety of partners and funding, the Blight Authority may have proven to be a useful partner for the City, whose resources and ability to carry out the daunting project are dwindling.