Posted at 12:00h in Environmental Conservation by The Intersector Project 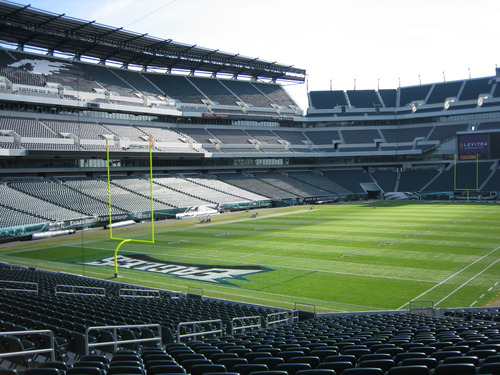 In 2003, the Philadelphia Eagles, part of the National Football League, partnered with the Natural Resources Defense Council (NRDC), city officials, and other businesses, to develop a greening program for their newly constructed Lincoln Financial Field. Known as the “Go Green” initiative, this greening program started with just a small recycle bin in every office, but eventually grew through extensive intersector collaboration into America’s premier example of sustainability in professional sports.

Operating a successful major sports stadium typically requires a significant input of natural resources from a diverse array of industries, including paper, plastic, textile, chemical, food, water, infrastructure, transportation, and energy. In fact, a single NFL game with 70,000 people in attendance, usually produces 58 tons of carbon dioxide pollution and about 15–25 tons of landfill waste per game. By comparison, the average American household produces about the same amount of carbon dioxide emissions and approximately a fifth less landfill waste over the course of an entire year. Despite the comparatively large environmental footprint of operating a professional football stadium in 2003, very few national teams concerned themselves with issues of sustainability. As a result, the Philadelphia Eagles looked to outside sources, like the NRDC, for technical advice and expertise in their initial greening activities. In doing so, the Eagles acknowledged their social responsibility to environmental sustainability and created a means for unprecedented cross-sector environmental collaboration in the field of professional sports.

Today, some of the Philadelphia Eagles’ primary sustainability accomplishments at Lincoln Financial Field include,

The Philadelphia Eagles largely attribute the success of their “Go Green” initiative to the collaborative process and to building a common fact base amongst participants. By having everyone involved on the same page about the importance of the greening work and ultimate goals of the collaboration, it created an open atmosphere conducive to the free flow of ideas. Once members of the collaboration began to demonstrate their organizational competency and ability to execute on some of the early greening projects, excitement and trust amongst participants in the collaboration grew, and that inspired more increasingly complex sustainability initiatives.

Even now, with a stadium that does not rely upon fossil fuels or significantly contribute waste to landfills, the Philadelphia Eagles and partners constantly evaluate the success of their “Go Green” initiative and continue to look for new ways to improve their environmental footprint. Recent projects include moving towards becoming a paperless organization and looking for ways to capture rainwater for non-potable reuse in the stadium’s operations. Moreover, the NRDC, after their successful collaboration with the Philadelphia Eagles, decided to take their newfound knowledge in reducing the environmental impacts of professional sports stadiums to other venues, and in 2010 co-founded the Green Sports Alliance. The Alliance, “is a non-profit organization with a mission to help sports teams, venues and leagues enhance their environmental performance.” It includes members from over 220 sports teams from 16 different leagues and represents the first time that all primary professional sports leagues in the United States have joined forces to address a social issue. So, what started as a simple recycling program at Lincoln Financial Field, eventually blossomed through the collaborative process into a pioneering movement in the greening of all professional sports nationwide.