Redeveloping the Riverfront in Detroit 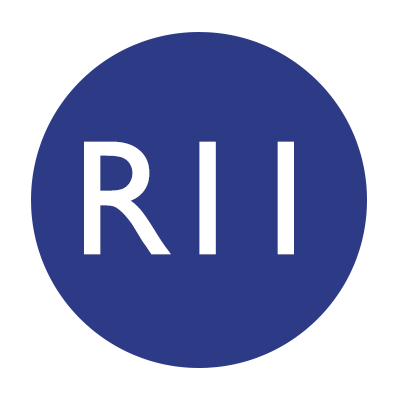 “Collaboration is challenging because you often have people with very different ways of approaching projects and different priorities. The benefit is that after 10 years of working on this project we have a riverfront that is redefining the City of Detroit. The riverfront was the first step in changing the way the people in our community interacted.”—Matt Cullen, Chair of the Detroit RiverFront Conservancy

For decades, the riverfront in Detroit was dotted with run-down industrial sites, parking lots, and overgrown shrubbery, rendering it inaccessible to the general public. In 2003, a group of local leaders from the Kresge Foundation, representatives from the City of Detroit, and General Motors, spearheaded by GM executive Matt Cullen, saw the potential for positive redevelopment; and formed the Detroit RiverFront Conservancy (DRFC), a non-profit organization with plans to collaboratively turn five and a half miles of riverfront property into a pedestrian-friendly walkway that would attract private and public interest in the space. From 2003 to 2014, the Conservancy has transformed the waterfront into a manicured and beautifully landscaped, bicyclist- and pedestrian-friendly public area with parks, plazas, pavilions and open green spaces. The DRFC also hosts a variety of events and programs to encourage visitors to remain active and enjoy the outdoors. This redevelopment has attracted further investment in the area with restaurants and other businesses moving to the riverfront, continuing the revitalization of the city’s riverfront space. A 2013 economic impact study revealed that there has been more than one billion dollars of public and private investment in the riverfront within the first 10 years of the DRFC’s existence. 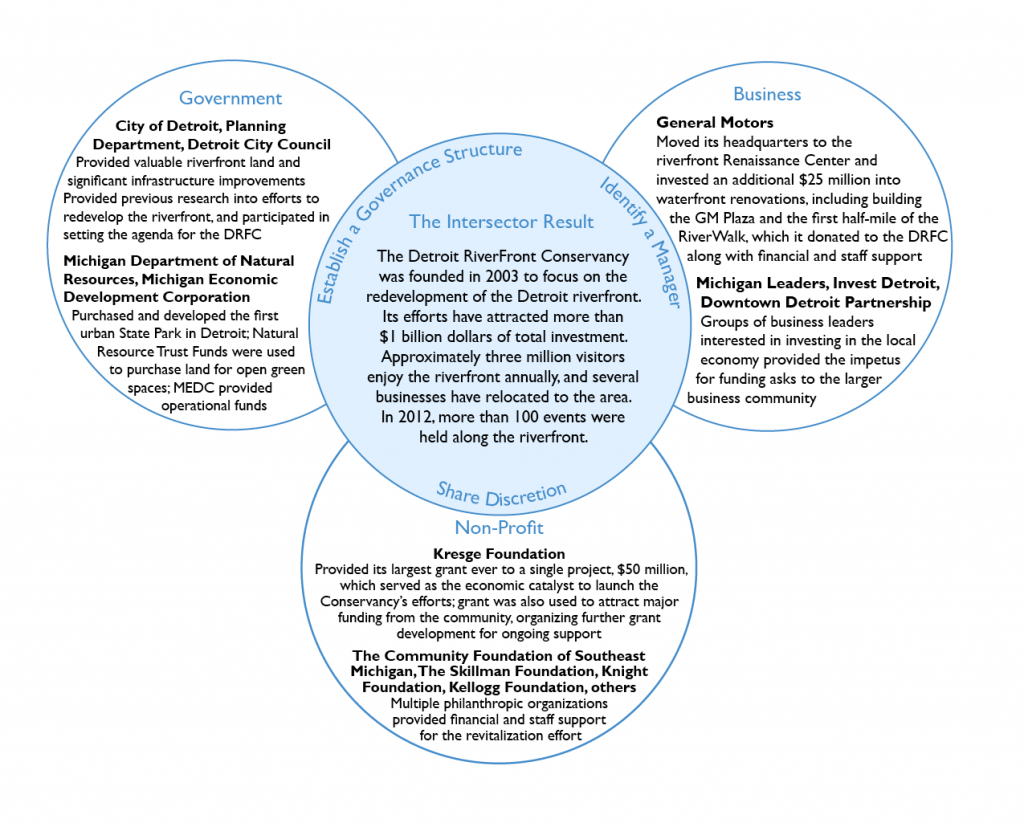 Matt is founding chairman of the Detroit RiverFront Conservancy. Previously, he was the General Manager of Economic Development and Enterprise Services at General Motors. He was one of the visionaries who felt that the GM campus at the Renaissance Center could provide community benefit, and whose experience across sectors helped create an environment conducive for collaboration across sectors.

Matt is a lifelong resident of the Detroit area, and over the course of his 29 years working at General Motors, had participated in a number of economic development opportunities in the communities in which GM operates. In the early 2000s, when the City of Detroit suffered an economic crisis and challenging economic circumstances, Matt recognized an opportunity to leverage his experience, networks, and expertise to turn the riverfront into a space accessible to residents and non-residents alike. The combination of Matt’s desire to positively impact the community of Detroit, while adding value to GM’s community investment, resulted in a public-private partnership with added social value.

During Matt’s time with GM, he was responsible for multiple aspects related to the management and development of the company’s global real estate portfolio including working as the chief architect of GM’s acquisition and redevelopment of the Renaissance Center – the new Global World Headquarters for the corporation. He brought this wealth of experience related to the realities of the development process to his leadership of the Detroit RiverFront Conservancy.

Matt’s agility in managing cross-sector collaborations stems from exposure to the public and non-profit sectors. His experience working with local government from his time at GM fosters his understanding of the complexity of dealing with a variety of agencies, often related to development plans and land acquisition in urban areas. This familiarity with the interrelationship between the various levels of government and the political realities of elected officials helped Matt relate to stakeholders from the public sector. His non-profit experience includes his position as a board member of the Hudson Weber Foundation, where in addition to his leadership role, he was also responsible for shoring up financial support for social impact projects. This also developed Matt’s familiarity with philanthropic foundations, their organizational priorities, and requirements, and how to best communicate with members from this sector.

Matt’s ties to the corporate and philanthropic community allowed him to reach out to participants that would solidify the success of the Detroit RiverFront Conservancy. Establishing a strong DRFC leadership team was critical. Faye Nelson, who Matt had previously worked with on a community revitalization project, was hired as the group’s first President and CEO. David Page, the Chairman of the Management committee of law firm of Honigman, Miller, Schwartz and Cohn, was brought on as DRFC Vice Chairman. At the time the DRFC was forming, the Kresge Foundation, headquartered in Southeast Michigan and led by President John Marshall, was seeking a transformative project to support revitalization in the region; thus Matt reached out to John.

At least a dozen studies dating as far back as the early 1950s had been conducted to evaluate the redevelopment potential of the waterfront. In December 2002, then Mayor Kwame M. Kilpatrick authorized a 90-day evaluation of past attempts by a 34-person group of stakeholders. Participants benchmarked other waterfront redevelopments throughout the United States and Canada to identify a set of best practices to follow in their creation of a revitalization strategy for the Detroit riverfront. Participants wanted to ensure that waterfront developments would be adapted to Detroit’s climate and culture, looking at riverfront developments in St Paul, Toronto, Chattanooga, and Cincinnati, among others, to gather lessons learned.

During the initial study, stakeholders drafted and signed an agreement outlining the vision and philosophy of this cross-sector collaboration: “Transform Detroit’s international riverfront – the face of the city – into a beautiful, exciting, safe, accessible world-class gathering place for all.” This represented an opportunity for each participant to feel a sense of ownership of the project, and commit resources to bring the vision to fruition. The Conservancy also wanted to have an endowment as a funding source to ensure the continuation and self-sustainability of the waterfront redevelopment. This, the Conservancy’s vision, has remained consistent for the past 10 years.

The Detroit RiverFront Conservancy is led by a constituency-based group of 44 members who constitute the Board of Directors. Members include private and public participants, many of whom participated in the original feasibility study for the DRFC. The organization has strived over the years to incorporate all relevant input from the community – prior attempts to revitalize the riverfront have failed, in part, due to the lack of incorporation of diverse interests of community members. Stakeholder diversity has been a key factor leading to the sustainability of the DRFC; one-third of board members are women, and another third represents racial minorities. The Board of Directors’ active participation includes attending fundraising efforts, community feedback forums, and policy meetings, as well as providing overall advisory support for the DRFC.

In addition to the Board of Directors, the DRFC is made up of eight workgroup committees representing non-profit, government, and private interests. The workgroup members are divided into committees based on skill sets. Once the Conservancy was officially formed in 2003, members created a board with representatives from the committees mirroring those that formed in 2002. Committees include the Audit Committee, Community Outreach and Communications Committee, Executive Committee, Operations and Programming Committee, Advance and Membership Committee, Governance and Nominating Committee, Planning Design and Development Committee, and the Finance and Investment Committee. Participants signed up to be on a committee, providing resources and expertise to foster the core development of the Detroit RiverFront Conservancy. To balance the work done in committees, the DRFC also hosts a variety of public outreach meetings to measure the pulse and desires of the residents of the city, using these meetings as an opportunity to produce ideas to make the RiverWalk uniquely Detroit.

Working for General Motors, Karen Slaughter-DuPerry spent 11 years in real estate development, one of the primary reasons she was selected as project manager for the Detroit RiverFront Conservancy. A lifelong resident of Detroit, her background in community development and architecture, the field in which she gained her master’s degree from the University of Michigan, helped her lead the Conservancy’s project efforts. According to Karen, architects learn to coordinate the multiple interests of various stakeholders. She was able to organize the many interests at play in the DRFC by focusing on mutually beneficial outcomes for each participant at the table. Her ties to the community and personal career development let her make the best use of existing resources in the Detroit community from the private and public sectors in order to effect lasting change in her community.

The Detroit riverfront redevelopment has changed the face of a struggling city, attracting approximately $1 billion in redevelopment and quality of life improvements for city residents, downtown workers and visitors. The first phase of the Detroit waterfront transformation project is 80 percent complete; the more than three miles along the east riverfront, along with the Dequindre Cut, are visited by approximately three million pedestrians and bikers annually. Convention, Sports, and Leisure International (CSL) was retained by the Detroit RiverFront Conservancy to prepare an economic impact report associated with the improvements to the Detroit riverfront. CSL also looked at past commercial development, assessed future plans, and prepared written reports summarizing research results. They found that current and near future capital expenditures total $80 million, with a $60 million endowment for future operations and maintenance. There are now parks, plazas, pavilions, pathways, and open green spaces connected by the RiverWalk along the east riverfront.