Posted at 12:00h in Infrastructure by The Intersector Project

What we can learn about collaboration from Detroit’s new M-1 RAIL project. 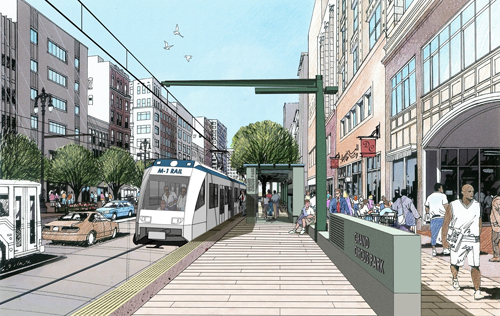 Construction begins today on a 3.3-mile modern streetcar line through downtown Detroit, the result of a collaboration across private, public, and non-profit sectors that is remarkable in scale. “Nobody in America – no community – has ever raised $100 million for a project like this. That is unprecedented,” U.S. Department of Transportation Secretary Ray LaHood told reporters in January of this year.

The M-1 project, also known as the Woodward Avenue Streetcar Line, breaks ground after seven-years of cross-sector effort. A 2006 Detroit Department of Transportation study into improving public transit through downtown compelled a group of business and philanthropic organizations to join in 2007 and form M-1 RAIL, a non-profit organization that is now leading the funding, design, construction, and operation of the line, which they hope will play a major role in revitalizing downtown Detroit.

The term “public-private partnership” does not fully capture the collaborative nature of this effort, which involves monthly meetings among community and business leaders who “provide expertise and input…to inform M-1 RAIL’s decision making around its communications and outreach strategies, and provide perspective about accessibility, economic development and workforce development” — this according to the M-1 website and coverage of the process.

No doubt, the plan has its detractors; some object to how the new line might affect surrounding real estate, while others say the project is not large enough in scope. Nevertheless, this project represents a unique collaboration. And it offers a learning opportunity for leaders of every sector in a society that increasingly demands cross-sector initiatives to tackle seemingly intractable issues.

Leadership
At the helm of the effort behind the transit project is Matt Cullen, President and CEO of M-1 RAIL and an early adopter of cross-sector collaboration. Cullen also steered the partnership that resulted in the Detroit RiverFront Conservancy, which The Intersector Project profiled in a case study this week. Cullen calls the M-1 project “similar in a lot of ways” to the effort to form the RiverFront Conservancy: “It’s a big infrastructure project for the city that’s going to provide, we think, tremendous economic development benefits. But it was complicated.”

It is precisely because of the complicated nature of cooperation across sectors that intersector collaborations like M-1 require dynamic leaders, skilled in engaging stakeholders with different backgrounds, skills, and perspectives.

Cullen, a lifelong resident of the Detroit area, has professional experience that makes him an ideal bridge-builder among sectors. His 29-year career at General Motors exposed him to the complexity of government agencies and the realities of Detroit’s political landscape, which served him well in relating to government stakeholders. He also gained relevant skills as a board member of the Hudson Weber Foundation, where, in addition to his leadership role, he was responsible for shoring up financial support for social impact projects. In the early 2000s, when Detroit was entrenched in a deep economic crisis, Cullen recognized an opportunity to leverage his experience, networks, and expertise to approach the crisis with innovative solutions.

Key Collaboration Tool: Managing Expectations and Results
Large-scale, transformational projects like the riverfront and the new streetcar line “are the kind of projects you can only get done with” the “broad approach” of cross-sector collaborations, Cullen told The Intersector Project.

While the M-1 RAIL project is just breaking ground, the seven-year effort to get the project going employed techniques and tools critical to reaching today’s success. The Intersector Project Toolkit provides a vocabulary for the tools practitioners use through the phases of a collaboration; analysis of the process involved in M-1 RAIL’s design and implementation reveal that a particular tool, Manage Expectations of Process and Results, has been critical to the collaboration. This tool refers to the capacity to encourage patience, celebrate small successes, and allow the individuals and organizations involved flexibility to ensure goals remain relevant as the collaboration progresses.

Detroit leaders began studying the possibility of returning rapid transit to Detroit in 2006. Shortly thereafter, a private group of local business leaders, who would ultimately form M-1, pledged matching funds to develop a $125 million, 3.4-mile line. As interest grew, so did the proposal — from a 3.4- to 9.3-mile line with an estimated price tag of $500 million. Although financial support began to coalesce around the project — the Kresge Foundation came forward with a $35 million grant, the U.S. Department of Transportation awarded the city $25 million in funding, and the Detroit City Council approved the sale of $125 million in bonds — the federal government withdrew support for the line in late 2011.

Working with multiple, complex stakeholders is a risk. Partners can withdraw or change commitments, and the ability to focus on success, move past failures, and revisit goals is key. By continually communicating progress, partners can learn to be mindful of each other’s differing bureaucratic processes, interests, and priorities, which maintains interest and engagement and allows the collaboration to maintain momentum.

When the federal government withdrew its support, the M-1 RAIL partners embarked on what they called a “re-envisioning and validating” to propose a smaller rail. This flexibility in shifting goals is key to cross-sector collaborations. The group again engaged partners, working with the Federal Transit Authority, the State of Michigan, the City of Detroit, Southeast Michigan Council of Governments, and a range of stakeholders to validate the capital and operating costs and to confirm existing private and philanthropic funding and secure new commitments.

While the M-1 RAIL project is not yet complete, today’s groundbreaking is a positive step for Detroit — and for those interested in the ability of cross-sector initiatives to address problems that cannot be solved by one sector alone. One of the great benefits of successful collaboration is that it catalyzes future collaboration. In Cullen’s words, “Not only does [working collaboratively] allow you to take on projects that couldn’t be done in any other way, but it’s like any other muscle that you exercise — you get better at it.”