Posted at 14:37h in Community Revitalization, Health and Wellbeing by The Intersector Project 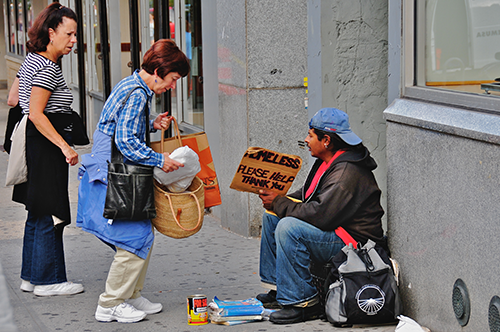 Among industrialized nations, the United States has the largest number of homeless women and children, according to the National Center on Family Homelessness. In New York City alone, more than 11,000 families with children (for a total of more than 23,000 children) found themselves sleeping in homeless shelters in May 2015. As housing costs continue to outpace income growth, more and more families that have one or more working adults with income are at risk of homelessness. In New York, for example, an estimated 2,000 families enter the shelter system each year even though they have the income to pay for affordable housing. Twenty-eight percent of families enter shelters despite the fact that one adult in the family is employed.

A collaboration of intersector partners recently announced the expansion of the innovative Come Home NYC, a program that works to match homeless families with incomes with affordable apartments. The initiative, which began as a pilot last fall, aims to place 300 families who earn 30 to 60 percent of the area median income with quality homes they can afford this year. These families earn an average of $35,000 annually, which qualifies them for affordable housing, but often makes them ineligible for many other programs, according to a press release announcing the expanded initiative.

“These families slip through the cracks because they don’t qualify for other programs, yet lack sufficient income to find homes they can afford without a helping hand,” said Judi Kende, Vice President and New York Market Leader for Enterprise Community Partners, a national affordable housing and community development organization and a lead partner in the initiative.

“These families slip through the cracks because they don’t qualify for other programs, yet lack sufficient income to find homes they can afford without a helping hand.”

Homelessness has devastating effects on children, including increased exposure to violence, incidence of infection, and potential for learning and behavioral disabilities. Experiencing homelessness as a child also increases the likelihood of being homeless as an adult. The monetary costs of homelessness are steep, too: a public cost of approximately $40,000 per family for the average 400 day stay, according to Department of Homeless Services (DHS) data.

Come Home NYC brings together Enterprise Community Partners, New York City’s DHS, Single Stop, and more than 25 private and non-profit affordable housing landlords. The Attorney General’s Office has committed $1.2 million to the initiative, while Robin Hood, New York’s largest poverty fighting organization, has committed $300,000; the program will require no ongoing subsidy from taxpayers. (Funds from the Attorney General’s Office come from previous settlements with banks that engaged in misconduct in the mortgage market that contributed to the housing market crash and the foreclosure crisis that followed.)

“‘Come Home NYC’ is an exemplary partnership that leverages resources from the public, private, not-for-profit, and philanthropic sectors so that working together, we can have a greater impact than working alone,” said David Saltzman, Executive Director of Robin Hood.

“‘Come Home NYC’ is an exemplary partnership that leverages resources from the public, private, not-for-profit, and philanthropic sectors so that working together, we can have a greater impact than working alone.”

The Department of Homeless Services identifies families in New York City homeless shelters who qualify for Come Home NYC. Enterprise recruited the pool of reputable landlords who have agreed to supply vacant apartments for Come Home NYC and  assists families in navigating the affordable housing application and leasing process. Single Stop provides families with financial services, benefits screening, tax filing, and more. Through the program, landlords receive a guarantee fund of up to $3,000 per lease to offset approved costs they may incur during Come Home NYC tenants’ first 18 months of occupancy, including missed rent, legal fees, and other approved expenses. Unused guarantee funds are recycled back into the program to help other families.

“Every family deserves a home, and Come Home NYC is an important and innovative step toward achieving that goal,” Attorney General A.G. Schneiderman said at the program announcement. “This innovative public-private partnership places homeless families into permanent housing without the need for ongoing taxpayer subsidies.”