Posted at 16:32h in Environmental Conservation, Infrastructure by The Intersector Project 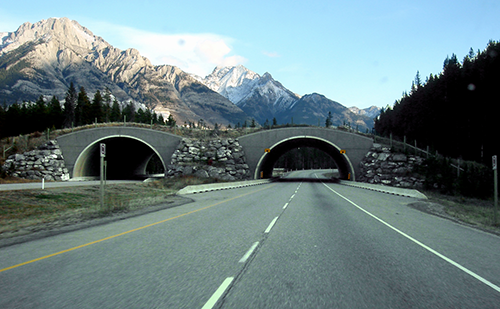 When we think about the challenges in our communities, infrastructure comes up frequently, even ranking as the number one mayoral priority in the recently released Menino Survey of Mayors. Infrastructure is often a human-centered issue, from fixing crumbling roads so we can get around more efficiently to improving parks for improved recreation. But what about building public infrastructure that improves the conservation of our natural environment? Wildlife crossings aim to reduce wildlife mortality and ease animal movement across habitats by providing a safe way for animals to cross roads, particularly for animals that need large, connected habitats to hunt and breed. While popular in Europe, wildlife crossings are less common in the United States, although a group of diverse stakeholders in California is trying to change that.

In January, the California Department of Transportation (Caltrans) held a public hearing that brought together nearly 300 environmental activists, wildlife advocates, government officials, and residents of Agoura Hills — where the proposed wildlife crossing will be located. These intersector actors discussed the construction of the Liberty Canyon Wildlife Crossing over U.S. Route 101 — “a grassy bridge that would allow large mammals such as mountain lions, bobcats, gray foxes, and mule deer to cross safely from the Simi Hills to the Santa Monica Mountains,” as detailed in an article in the Topanga Messenger. The project would result in the first wildlife crossing in California and the largest in the world, and it would also include a hiking trail.

The impetus behind the project is the disruption in the habitat of large mammals caused by the original construction of US-101. “At the moment, we don’t have any safe way for [mountain lions] to cross the freeway,” explained Dr. Seth Riley, Chief Wildlife Biologist with the National Park Service, in the Topanga Messenger. According to Riley, the decrease in the habitat of mountain lions has resulted in inbreeding and territorial fighting, resulting in the lowest genetic diversity in the world.

Caltrans spokeswoman Lauren Wonder described the Liberty Canyon Wildlife Crossing as “a unique opportunity for public private partnership,” both in the environmental study that must be completed before beginning construction and in the construction itself, which would happen with both public and private funds. Current partners range from local government officials (Senator Fran Pavley, D-Agoura Hills and Assembly member Richard Bloom) to government agencies (Caltrans and the State Coastal Conservancy) to non-profits (the National Wildlife Federation).

Caltrans is not a stranger to multi-sector solutions to complex problems in California. It was a key player in the cross-sector infrastructure project to improve train efficiency and reduce noise and air pollution that we explore in our case study Conducting a Grade Separation for Colton Crossing. Caltrans did not play a convening role in the Colton Crossing case, as it does in the wildlife crossing project. That role in Colton Crossing was played by the San Bernardino Associated Governments (SANBAG), which served as a neutral third party that helped public and private stakeholders ensure they were being heard. Similar to the wildlife crossing project, however, the Colton Crossing project began with public meetings to facilitate conversation between cross-sector stakeholders.

Though the wildlife crossing is still in the planning stages, the cross-sector experience that Caltrans brings to the project will undoubtedly be useful as it progresses. The Liberty Canyon Wildlife Crossing may serve as inspiration for other stakeholders in the United States who are looking for ways to improve the natural habitat in their community through cross-sector infrastructure projects.