Posted at 16:52h in Environmental Conservation by The Intersector Project

The project we’re celebrating today and the partnership that made it possible show our state and its utilities are working together to maintain our livelihood and find solutions to the challenges posed by ever-increasing carbon constraints. – Kentucky Governor Steve Beshear 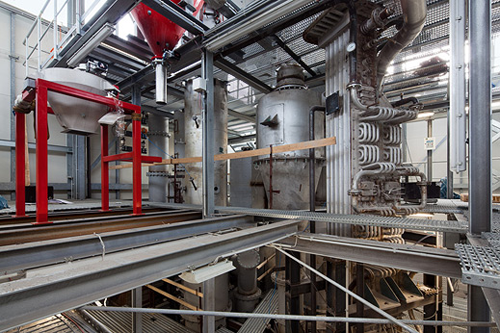 An intersector collaboration in Kentucky is driving construction on the state’s first megawatt-scale carbon capture pilot unit — a technology whose aim is to test capabilities to manage and reduce carbon dioxide emissions from coal-fired power plants.

The collaboration brings together the University of Kentucky Center for Applied Energy Research, the Kentucky Department of Energy Development and Independence, and a consortium of government agencies, electric utilities, and research organizations that make up the state’s Carbon Management Research Group. Critical funding also comes from the U.S. Department of Energy.

The partnership began in 2006, when LG&E and KU Energy, one of the state’s major utilities companies, committed $1.5 million to UK’s Center for Applied Energy Research to support carbon management research. This research led to the creation of the Carbon Management Research Group consortium, which pools financial resources to support research into large-scale carbon dioxide capture systems — research too expensive to be funded by a single partner alone, highlighting a key motivation for partnering across sectors.

These cross-sector partners are motivated by differing concerns: In announcing the initiative, LG&E and KU Energy emphasized industry and environmental considerations, saying “in 2006, there were no regulations on carbon emissions, but we recognized the importance of this research for our company and our commonwealth.” Kentucky Governor Steve Beshear focused on the importance of economic motivations: “Generation of energy, affordable energy, and the jobs energy provides all play a key role in the health of Kentucky’s economy.” UK President Eli Capilouto emphasized the viability of research to drive industry changes, while Julio Friedmann of the Department of Energy emphasized the extent to which the project “underscores the viability of coal as part of America’s low-carbon economy.”

These partners illustrate how organizations with differing motivations, cultures, and operational demands can unite around a common aim, in a tactic The Intersector Project Toolkit refers to as Share a Vision of Success — the agreement on a set of project goals and ideal outcomes that clarify the mission and priorities of the collaboration. Defining common purpose links stakeholders together and creates a mutual understanding of the benefits of success.

The pilot carbon capture unit, expected to complete construction this fall, will test integration of carbon capture technology at an existing power plant and lead to discoveries and ideation on how to integrate similar technology on a larger scale. According to the LG&E and KU utility company, the carbon capture pilot system will undergo a testing period through mid-2016, followed by a period of determining “key discoveries” — hopefully allowing others to replicate this collaboration’s efforts across the United States.