Posted at 15:43h in Infrastructure by The Intersector Project 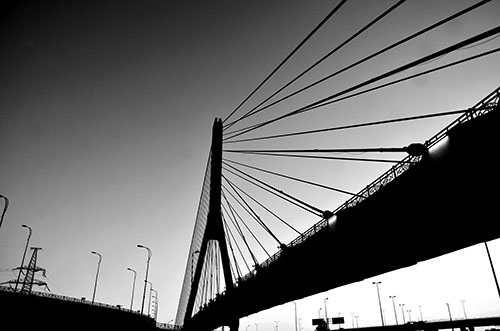 In our current time of governmental transition, improving U.S. infrastructure is generating considerable discussion. And it’s clear why: Our nation is failing to keep up with a backlog of overdue maintenance, as well as the need for new construction. The American Society of Civil Engineers gives the United States an overall grade of D+ for infrastructure.

Since hosting a summit last month to facilitate the exchange of ideas among cross-sector stakeholders on the critical issues and problems that need to be resolved to move U.S. infrastructure forward, The Intersector Project has been particularly tuned in to this topic. Infrastructure is a model intersector issue — each of the elements of our nation’s infrastructure impacts and is affected by a complex network of stakeholders including residents, federal, state, county, and city governments, financing organizations, trade associations, research and development organizations, design, construction, and engineering firms, and other professional service firms.

The articles in this month’s Intersector Briefing illustrate the cross-sector dynamics at play in U.S. infrastructure. Some  propose ideas for how the new presidential administration should tackle our present infrastructure challenges, while others are focused on issues and triumphs related to infrastructure more generally — from the challenges of public-private dynamics in one project in Virginia to the strides New Orleans is making in resiliency — stories that remain relevant no matter the political climate.

Aubrey Layne: Trump’s infrastructure plan is no magic bullet
In this column in The Virginian-Pilot, Virginia’s Secretary of Transportation Aubrey Layne discusses President Donald Trump’s infrastructure plan and its reliance on P3s, arguing something similar to what we heard consistently from the cross-sector stakeholders at our December summit: that what the country actually needs is more funding (direct government spending). “Public-private partnerships can be the right tool to finance the right project. But we need more robust resources, with sustainable public funding as the key source, to fund the country’s transportation needs,” he writes.

What Trump can learn from Virginia’s infrastructure projects
From The Washington Post’s Peter Galuszka comes this opinion piece arguing Virginia’s infrastructure projects could serve as a model for the Trump administration as they decide how to pay for their proposed $1 trillion worth of investment in infrastructure (which includes a plan to offer nearly $140 billion in federal tax credits to private investors that back transportation projects, a plan that 66 percent of Americans oppose, according to a Washington Post – ABC News poll.) Virginia has a great deal of experience with public-private transportation projects, Galuszka explains, both ones that have resulted in successful projects that wouldn’t otherwise have been built and ones that have failed, resulting in partnership reforms. “Shoring up the nation’s infrastructure sounds like a great idea,” Galuszka writes. “But Trump may end up simply handing out tax credits to developers or granting subsidized loans. In that case, taxpayers would get stuck with the risk, as Virginia’s experience has shown.”

Public infrastructure as stealth privatization
This article in The American Prospect looks at Trump’s infrastructure plan and brings up issues of public-private partnerships vs. privatization. It takes an interesting look at the ambiguity of the term P3 and the confusion this ambiguity can result in: “The term public-private partnership has become an imprecise catch-all that can capture the traditional procurement described above (public money, private builders, public operation) but is now typically used to describe a project that privatizes the entire process — from design and financing to operation and upkeep — to private contractors, investors and contractors.”

Federal inefficiencies that stifle innovation in infrastructure
Last month in Governing, Stephen Goldsmith, Professor of Practice at the Harvard Kennedy School and Director of the Innovations in American Government Program, took this moment of transition to write more broadly about how federal regulations currently discourage P3 innovation in infrastructure. “Congress and the White House should broadly review all of the current impediments to private innovation in funding and management, removing obsolete labor and capital requirements and giving authority to local and state governments, which will unlock much more value than we could ever produce in appropriated dollars alone,” he recommends.

Amid infrastructure crisis, accessibility-minded agencies are needed more than ever
This recap of a Brookings Institution event from Route Fifty looks at issues related to accessibility, defined by Brookings as “the number of value destinations — jobs, schools, parks, stores — individuals can reach in a set amount of time.” The key issue here, Stephanie Pollack, Secretary and CEO of the Massachusetts Department of Transportation, explained, is that “transportation agencies know surprisingly little about the people and places that they serve because they don’t need to, to do their job.” This is a topic we’ve discussed before as it relates to how citizen engagement can result in more successful transportation P3s. Receiving a “localized user perspective” can help these P3s because their success relies heavily on citizen use. For more on how to engage citizens, see Engaging citizens to improve outcomes of public-private partnerships in transportation.

Non-compete agreement in one Virginia tunnel project haunts another
The mismanagement of one P3 infrastructure project in Virginia could be having effects on another, argues this piece in The Washington Post about non-compete agreements. In a 2011 public-private tunnel deal, Virginia agreed that if it built bridges or tunnels in the same area in the next half-century, “it would be on the hook to pay lost tolls that could be attributed to” the 2011 project. The author claims that “under political pressure to reach a deal after the last recession, Virginia officials agreed to the clause without calculating potential future costs.” A new project would fall under the category of competing with the 2011 project, resulting in unknown costs to the state. It’s important for those involved in similar public-private partnerships for infrastructure to hear not just stories of success, but also of potential pitfalls, in order to avoid similar missteps in the future.

What being 18 months into an urban resilience strategy looks like
On a more positive note, this Route Fifty piece looks at New Orleans’ resilience strategy, which has strong ties to its infrastructure plans and involves many partnerships with the private sector. “New Orleans secured more than $200 million for critical infrastructure and is midway through the city’s largest-ever capital program, 18 months since releasing the world’s first comprehensive urban resilience strategy.” writes Dave Nyczepir. The City also created an Office of Resilience and Sustainability. New Orleans Chief Resilience Officer Jeff Herbert explains that that almost all the actions included in the City’s resilience strategy had commitment from outside partners when it was released, partners for whom Herbert serves as a single point of contact in aligning these diverse efforts.