Posted at 15:54h in Community Revitalization by The Intersector Project 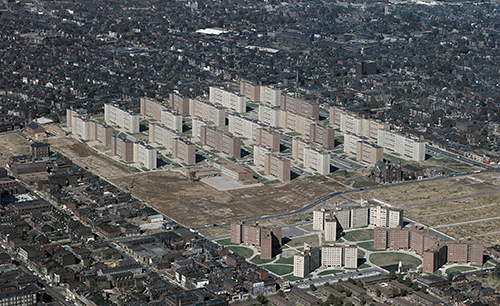 The Pruitt–Igoe public housing complex — demolished in in the mid 1970s — was composed of 33 buildings of 11 stories each, located on 57 acres of the Near North Side of St. Louis, Missouri (Wikipedia).

Leaders in cities across the United States are finding ways to break the cycle of intergenerational poverty in their communities. In Springfield, MO, the Impacting Poverty Commission was formed in March 2014 to bring together city officials, university professors, community leaders, members of the Springfield Chamber of Commerce and others to collectively learn about root causes and assess best practices to address the growing, but largely ignored, issue of poverty in Springfield.

Created by the Community Partnerships of the Ozarks, the 33-member Impacting Poverty Commission is charged with setting a vision, measurable goals, and strategies for moving the community toward a reduction in poverty via a two-generational approach. For the first nine months, members gathered together to take stock of how poverty was impacting their city. They found that 25.6 percent of Springfield’s residents were living below the poverty level and that poverty had grown at a rate of 14.3 percent in 2012. One committee member, Francine Pratt, described Springfield as a “program-rich, but system-poor” city. The city had numerous agencies and community organizations doing strong work to help pull people out of poverty, but those organizations lacked unity and an entity to guide them all toward specific goals. As a result, the committee first focused on learning about past progress, and leveraging existing interorganizational and public and private collaborations to maximize their future impact.

The Intersector Project’s Toolkit refers to this process of collecting information on the issue and holding discussions to agree on the factors that influence its progression as Build a Common Fact Base. This cross-sector strategy refers to reaching consensus among collaboration partners as to what facts relating to the issue are most relevant to informing collaboration strategy.

The Impacting Poverty Commission will build from its nine month process of research, listening to speakers, and conducting exercises to better understand the factors the led some residents into poverty and work to develop a strategic plan to implement evidence-based practices to address the growing poverty in their communities.