May 01 2014 Edge of Intersection: Write A House Detroit 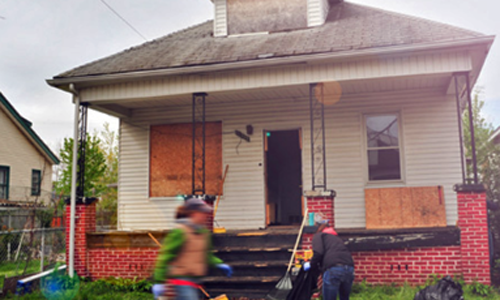 Once a thriving economic and cultural hub, the city of Detroit, Michigan filed for bankruptcy in 2013, an estimated $20 billion in debt after decades of white flight, plummeting tax revenues, and a housing crisis compounded by the 2008 recession. Leaders at the state, city, and local level have all proposed solutions. One such leader is Toby Barlow, a writer and advertising executive who moved to Detroit and, in 2012, launched Write A House, a 501 (c3) organization that plans to match writers with vacant houses to solve two of the city’s problems at once.

Writers chosen for the project will be given deeds to live in formerly unoccupied houses rent-free, in exchange for their contribution to Detroit’s burgeoning literary scene and a commitment to the neighborhood; after two years in residence, they become owners of the property. Emphasizing “literary arts, vocational education, neighborhood stabilization,” Write A House is a promising collaboration between multiple interests seeking a revitalized Detroit. So far, Write A House has rehabilitated one house in anticipation of their first writer-in-residence, and plan to give away three houses annually.

Write A House founder Toby might seem an unlikely grass-roots organizer and public champion: with a background in advertising for multinational corporations like HSBC and De Beers, and a successful sideline in fiction and filmmaking, he came to the idea of Write A House through his conviction that a healthy creative culture was not just the product of a healthy society, but could actually encourage civic revitalization. In 2006, while directing a movie for Ford about the company’s shifting relationship with Detroit, Toby became intrigued by what he saw of the city and decided to relocate. Detroit’s financial crisis had obviated the deep need for stronger community and innovative solutions to the failures of social services, and despite all the blight, Toby saw in Detroit a culture of change and limitless possibility. Specifically, he saw how a new creative class could steward abandoned houses while making a lasting, positive impact on the community. While attracting creative people and encouraging them to stay was part of the project, supporting the existing population of Detroit was just as important. With that in mind, Toby enlisted Detroit Young Builders, a non-profit organization providing education, support services, counseling, leadership development, and on-the-job residential construction training to Detroit’s disadvantaged youth.

Share a Vision of Success – a collaboration tactic identified in The Intersector Project’s Toolkit – was and remains key to Write A House’s efforts. While the possibilities for revitalizing Detroit are nearly endless, Write A House focused on one thing – matching writers with houses – and enlisted partners who shared that vision, prioritizing their goals and limiting the scope of the project to improve its chances of success. Write A House Detroit is still in formation, and it is too early to know if and how other parties will join in the effort. But given Toby’s track record, and the need for innovative collaboration for Detroit’s revitalization, it seems quite possible that Write A House is an intersector success in the making.