Posted at 15:49h in Community Revitalization, Education by The Intersector Project 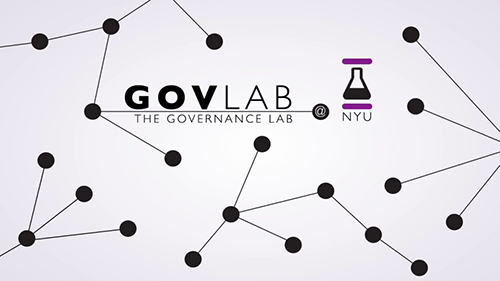 This post is part of The Intersector Project podcast series featuring interviews with practitioners and supporters of intersector collaboration.

We were thrilled last week to have the opportunity to to talk with Alan Kantrow of The Governance Lab at NYU. GovLab works to enable institutions and individuals to work more collaboratively and effectively to make “better decisions and solve public problems.”

In our interview, Alan described GovLab as an “action research based organization,” saying, “We study things and create reports and provide advice and so on, but not by sitting on our duff in an office downloading data from the Internet.” Instead, GovLab engages with partners to gather and codify knowledge from the field. “Our real focus on the ground is trying to understand the nuanced context of when stuff works, for whom, under what conditions, serving which constituencies so that what we learn is reusable,” Alan said.

GovLab recently announced the launch of GovLab Academy, a “free, online community for those interested in teaching and learning how to open their institutions and work more collaboratively to solve public problems that improve people’s lives.” The Academy offers practical, action-oriented videos, podcasts, readings, and activities to enable the learner to “acquire the mindset and skillset for open and collaborative work.”

For more on GovLab, GovLab Academy, and the role of collaboration in effective problem solving, check out our interview with Alan below.

The Intersector Project: Could you tell us a little bit more about GovLab Academy?

Alan Kantrow: The plan for the Academy has been part of GovLab from the very beginning, which is that as part of the mission statement to improve people’s lives by changing the way we govern, there is the wish to drive new knowledge and understanding through study, through research, through advice, re-intervention…but also through training and support of people as they try to do stuff in the real world. The skill and capability building thing has been part of the original mission frame from the very beginning. The Academy is simply the broad umbrella label that we put over that range of activities.

The Intersector Project: Right. As you said earlier, GovLab is very focused on practitioners and looking at, to quote you, “what works for you.”

Part of the mission is not only skill and capability building of the individual where we’re trying to create awareness of new technologies, and alertness to how things work, and what to watch out for, and what to try, and all those templates, and diagnostics and so on, but also how do we help make you more effective getting stuff done working in and through and with teams. Because that’s the reality of the work that happens in this world.

The Academy is a place where in virtually all of what we do, as much as we can, we are aiming our programs and offerings not as isolated individuals trying to study by themselves in a corner, but to groups working together on real issues where we have them in the context of their efforts to do work together.

The Intersector Project: Why is it important to build networks across disciplines?

Alan Kantrow: Again, there are two reasons, why the “work together” and why “across disciplines.” Several things that are pretty obvious: The first is, the kinds of large problems that exist both for private sector companies as they go about their strategies and, God knows, even more so for governments as they deal with the broad public issues that increasingly face us and face other geographies of today. These issues are not neat and gentle observers of traditional academic discipline boundaries. It’s not the case that the problems that a major urban official faces exist entirely within the structures of any single discipline as taught at any major university. These are complex, multifaceted problems. They span disciplines, and very often they fall in the cracks between disciplines.

If you come to them only with a very limited disciplinary or sectoral lens you miss the complexity, you miss all the inter-linkages, and you miss the systemic nature of the thing that you’re trying to address. In a non-trivial part in our experience of why a lot of very smart and well intended effort doesn’t pay off in making things better, is that the effort is implicitly framed as an attack on, or an attempt to address, a very specific point issue when in fact the issue is systemic and its systemic nature is ignored.

Alan Kantrow: It plays a huge role, but we have to be careful about how we phrase it. What you don’t want to be doing is arguing that people ought to go out and try to fail to maximize learning. The notion is that most things that we try do fail. The great [research and development] labs in the private sector, 90-plus percent of the stuff they do fails. The issue is that those failures are wasted if two things are the case: They are wasted if the efforts that you’re trying to accomplish, the things you’re trying to do, are not organized as part of an explicit, intentional, experimental research design. If you’re just throwing spaghetti at the wall and it doesn’t stick, and you don’t have a theory of the case about why you’re throwing it the way you are and what you’re trying to learn by doing that, it falls off, but you learn nothing because there isn’t an experimental design that frames what you’re doing so that you’re organized to learn from it.

The first part of failure is the stuff that you want to be trying, the pilots and the experiments that you’re doing, need to have a very, very thoughtful, if you will, research and learning agenda attached to them so that when stuff doesn’t work it’s not that you’ve wasted the effort. It’s that you’ve learned something that helps advance the research agenda so that you know what to try next. That’s a very, very important piece of it. The other important piece of it is, you need to be extremely careful and choiceful about the kinds of things you are trying to learn and the degree to which the experimental design that you’re setting up is of a kind that will make those particular lessons visible.

For example, you could be trying a new approach to organizing bus schedules, and it doesn’t work, and the evidence for that is very clear, because your ridership goes down or what not. If you are set up to observe all that, fine; you’ve learned something about what needs to be true about the bus schedule to make it work. But that may not tell you anything about how you need to organize your bus maintenance system so that, if you get the schedule right, you’re actually able to have the moving vehicles available to keep the schedule. By which I mean, these are systemic issues, and you need to be very clear, not about what in particular you’re trying to learn, but what part of the equation they do or do not illustrate, so that you don’t learn things which you can’t connect up ultimately into a system, because you need the integrated reality to make real traction.

Alan Kantrow: If they are managed well, if they are entered into with the right set of understandings and protocols amongst all the actors, if this is the world that you live in most of the time you will then knew, painfully well, that it is not the case that all the parties to these arrangements have exactly the same agendas. It’s not that they have all exactly the same priorities. Either they have shared purposes or at least purposes that overlap but they’re not identical. Unless there is real attention, not just to the notion that we’re all glued at the hip to each other because we’re trying to do good stuff together, but that in order for organizations and operations as different as ours are to work effectively together we need to have a real theory of the case about how we’re going to organize and how we’re going to this. We can’t just make it up. We can’t make it up on the fly. There needs to be every bit as much of an organizational and a work together plan as there is a shared commitment to kind of downstream outcomes. The organizational thing is often the piece that gets either ignored or under-attended to. It’s hard.

The Intersector Project: Do you have a sense from working with practitioners on the ground about what kinds of tools they would need to effectively participate in cross sector collaboration?

Alan Kantrow: That’s a very important question. Any effort to deal with it seriously becomes a very very long conversation in its own right. Let me say just two or three quick things from our experience. Here are the things that we note that often get most missed and are most needed even though the need is not always clear to the folks themselves. There are two or three things that we observe that are almost always true. Some various, but almost always true in these kinds of efforts.

First is, especially when you’re getting groups together that come from different organizational or sectoral backgrounds, part of the benefit you get is the multiplicity, the viewpoints, and the complementarity of knowledge and expertise, and so the whole is greater than the sum of the parts, all of that. What you also get is a jumbled bunch of passive assumptions that each of these groups and each of these individuals make which are not the same, and which are not discussed and ordered precisely because they’re passive.

A thing that we have found that is really really important, especially when you’re working across those kinds of organizational boundaries or sources of origin, is a process of making in-going assumption and framing clear and explicit so it can may be made discussable. Hugely important. I’m sure you’ve had this experience as well. You get into a project type context and people deflect very quickly in the direction of the problem they’re trying to solve in defining the problem, and then immediately start talking about the solution. It’s yes yes yes, we’re working on this real difficult thing having to do with X. Now let me tell you about this app I want to build, or let’s talk about the website, or whatever it is. What we find is that, to your question about the tools they need, a template for working through and validating with very real rigor and granularity the in-going problem definition against which they’re working. This tends to be a thing over which groups hurdle with great speed and don’t get quite right and don’t quite get in tight, tight, tight focus and that then comes back to haunt. I think the tool of making assumptions explicit and the tool of really refining and sharpening problem definition are at least two of the things that we have found to be most needed and most valuable when applied.

The Intersector Project: Thank you so much, Alan. It was wonderful talking with you.

For more podcasts visit our SoundCloud.