Posted at 18:39h in Health and Wellbeing, Infrastructure, Transportation by The Intersector Project 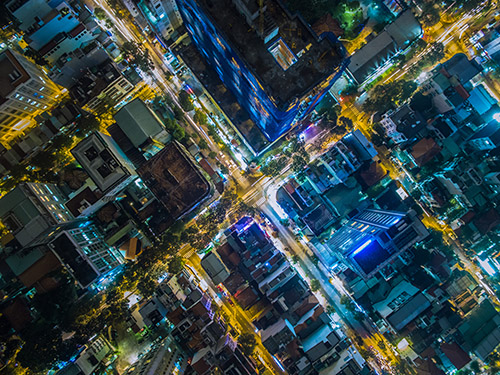 “Smart city” is a phrase referenced more and more often in discussions related to urban development, whether by urban planners, city leaders, or tech companies. But what does it really mean? “The concept of a smart city is somewhat amorphous, but it’s focused on cities leading with technological innovation,” Brooks Rainwater of the National League of Cities told Pew Charitable Trusts. An innovation analyst for Kansas City described it as “a paradigm shift in the way we think.” Others use a more technical definition, referencing a city’s use of information and communication technology (ICT) and Internet of Things technology (IoT) to improve its everyday functions. (This helpful infographic presents various city functions that are considered to be part of smart cities, from instant traffic updates to intelligent and weather-adaptive streetlights to citywide free wifi.)

There are signs that more and more localities are working to become smart cities — Globally, smart city projects rose more than 38 percent over three years, from 170 at the end of 2013 to more than 235 in 2016, GovTech reports. The Intersector Project’s interest in smart cities is also growing, as many of the aspects of building and growing a smart city can’t be achieved by the public sector alone. This month’s Intersector Briefing looks at the importance of collaboration among the business, government, and non-profit sectors in building smart cities, from a recent smart city conference to cybersecurity issues to innovation in Tampa, and more.

Smart cities: Civic tech innovation and the Internet of Things
The Smart Cities NYC conference happened earlier this month, and the Gotham Gazette provides a helpful recap of some interesting panels. In one panel, “all speakers agreed on the critical role of public private partnerships (P3) to advance the development of smart cities, for instance, government partnering with startups, telecommunications providers, and universities.” The panelists provided specifics for why non-governmental actors are so important — For instance, telecommunications companies and startups may own important digital space or data, and data scientists at universities can “make sense of information and find patterns.”

Why P3s are the brains behind smart cities
“There’s a growing number of cities worldwide that can serve as success models when it comes to convincing the private sector about the business benefits to building smart mass transit systems as the backbone of a smart city,” writes Laetitia Gazel Anthoine, CEO of Connectthings, in GovTech. Her focus is on smart transportation systems, but her argument — that without P3s, smart city plans are unlikely to be implemented — can be applied to many aspects of smart cities.

Smart cities are going to be a security nightmare
Providing a sobering reminder of the challenges that can come with smart cities, Todd Thibodeaux, President and CEO of CompTIA, writes about the links between smart cities and cybersecurity in the Harvard Business Review. “As smart city infrastructure proliferates, the stakes for protecting these digital foundations will only get higher,” he explains. “While investment in smart technology has gone up, many of these innovations are deployed without robust testing and cybersecurity is often neglected.” As we’ve discussed in a previous Intersector Briefing, improving cybersecurity also relies on collaboration between the public and private sectors. So not only must cross-sector collaboration be involved in building smart cities — Sectors must also work together to protect the digital assets involved.

The 3 generations of smart cities
This 2015 Forbes piece from urban strategist Boyd Cohen provides a helpful framework for thinking about different phases of smart city development, from tech company-driven to government-driven to citizen-driven. The transition from one phase to another, however, is not always consistent, with some cities making the shift easily while others remain stuck in one throughout their development. The tech company driven phase — Smart Cities 1.0 — “is characterized by technology providers encouraging the adoption of their solutions to cities that were really not equipped to properly understand the implications of the technology solutions or how they may impact citizen quality of life.” The second phase, which, according to Cohen, most leading smart cities are in, involves technology, but is city-led. The third phase embraces citizen engagement and co-creation. Vienna, for example, “in a partnership with the local energy company, Wien Energy … included citizens as investors in local solar plants as contribution to the city’s 2050 renewable energy objectives. It has also had a strong focus on citizen engagement in addressing affordable housing and gender equality.” What smart city model works best? According to Cohen, “a blend of Smart Cities 2.0 and Smart Cities 3.0 probably represent the best chance for the future.”

How cross-sector partnerships are fueling innovation in Tampa
This Route Fifty piece looks at public-private partnerships and smart city progress in Tampa. “The fast-growing city on Florida’s central Gulf coast is becoming a model for how collaboration between government and business and forward-thinking leadership can foster a growing digital economy,” Amy Keller writes. “Some cities say ‘We’re an entrepreneur kind of hub’ and it all stays locked away in tech, but when you have the spirit of entrepreneurship that exists in the university and city hall and downtown and on the retail side — in the bricks and mortar of what makes a city — that’s something pretty unique and pretty special,” explained Chelsea Collier, an expert on smart cities, in a panel at the University of Tampa.

‘4 Cs’ — commitment, collaboration, consistency, community — crucial for smart cities
Asia is a center of smart city innovation, according to a white paper from the United Parcel Service and the Consumer Technology Association detailed in this GovTech piece. “I’d still say in terms of the U.S., we’re still at a test and learn and pilot stage,” said David Roegge, UPS’ Director of High-tech Segment Marketing. How should cities become truly “smart?” One way is to “get buy-in from the city’s entire ecosystem, from community groups to private utility companies,” according to Bob Bennett, Chief Innovation Officer for Kansas City, Missouri.