Posted at 12:00h in Infrastructure by The Intersector Project 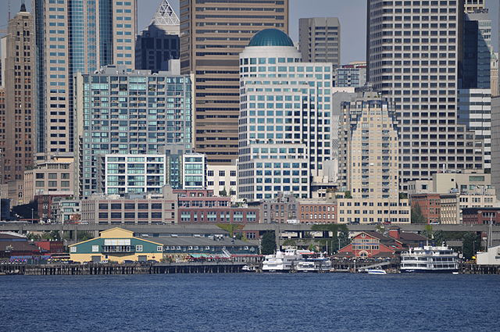 In Seattle, frequent, severe storms stress the city’s drainage, causing flooding in the streets and sewer backups — a condition that promises to be exacerbated by climate change. But an innovative collaboration driven by the city’s water, sewer, and drainage agency has resulted in the Seattle RainWatch initiative, an emergency-management and climatology tool whose purpose is to enable the city to respond to major weather events as they occur.

The RainWatch initiatve merges traditional radar imagery with data from rain gauges positioned throughout the city, according to Chris Toman, who serves on the Seattle Public Utilities’ (SPU) Solid Waste Advisory Committee and wrote recently about the RainWatch program in Governing. Together with data supplied from the city on customer calls and drain overflows, SPU can assess rainfall neighborhood-by-neighborhood and track the storm as it moves. The goal is for SPU to use this information to send crews to clear drain pipes or notify the public in advance of a heavy rain.

Seattle’s RainWatch program came about through the long-term commitment of Seattle Public Utilities, a government entity, and Paul Fleming, who is responsible for leading climate research initiatives, assessing climate risks, developing adaptation and mitigation strategies, and establishing collaborative partnerships. To launch the initiative, Fleming first engaged partners in the science and research community. Researchers from the University of Washington Climate Impact Group helped SPU identify how climate change will affect “an increase in prolonged, high-intensity rainstorms that were previously considered ‘once-a-century’ events,” Toman wrote. The utility company next hired a meteorologist, James Rufo-Hill, who, in collaboration with researchers at UW’s Department of Atmospheric Sciences, leads the RainWatch initiative. Finally, the RainWatch program also depends on residents of Seattle, who assist in tracking the effects of major weather through phone calls to the city. SPU is also working with private sector companies, such as Seattle City Light, to better prepare the city for inclement weather. According to Toman, it is SPU’s commitment to establishing partnerships that has positioned the utility service to adapt to changing weather and climate.

Cross-sector collaboration enables leaders to tackle issues so complex that they require resources that cannot be mustered by one sector alone, as the RainWatch program shows. “Perhaps the greatest challenge in addressing climate-change impacts is that solutions for one city often aren’t relevant to another,” Toman wrote. “To identify risks and develop tools to adapt, cities would do well to follow Seattle’s lead by partnering with outside experts and committing long-term resources to the issue.”