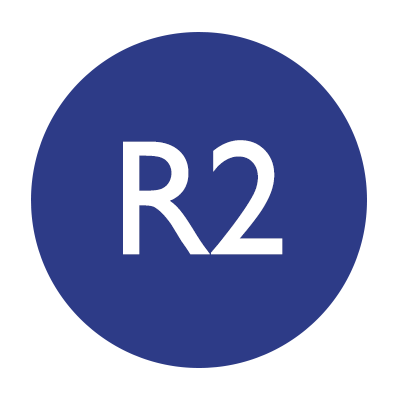 “I think if there’s a lesson to be learned, assume there is a network, find and locate them, and then explore what the goal confluence is between what you want and what their networks want… that’s just good politics to me.”– John Eldred, Jamestown Area Labor Management Committee

Shortly after Stan Lundine took office as mayor of Jamestown in 1970, the city’s unemployment rate had reached 10.2 percent – over twice the national average. In 1971, nearly 1,000 workers were unemployed and an additional 2,800 jobs were in jeopardy as the largest company in town closed their doors. The contentious relationship between local unions and businesses had further damaged Jamestown’s reputation as an attractive place for manufacturers, driving away new businesses that may have otherwise invested in the city and revitalized its suffering economy. Drawing on all of his available resources – from his personal network and reputation in Jamestown, to his political leadership and ability to secure federal funding – Stan developed the Jamestown Area Labor Management Committee (JALMC) as a way to mediate labor disputes. With the additional leadership of John Eldred, a consultant who understood the dynamics of factories and labor relations, the JALMC’s programs expanded into individual plants, focusing on worker engagement, skills development, and programs to increase productivity. The success of the JALMC model not only improved working conditions in Jamestown, but also attracted new investments from national manufacturers. Within three years of the JALMC’s launch, unemployment in Jamestown had dropped to 4.2 percent, and new incentives had increased worker productivity and quality of work-life. 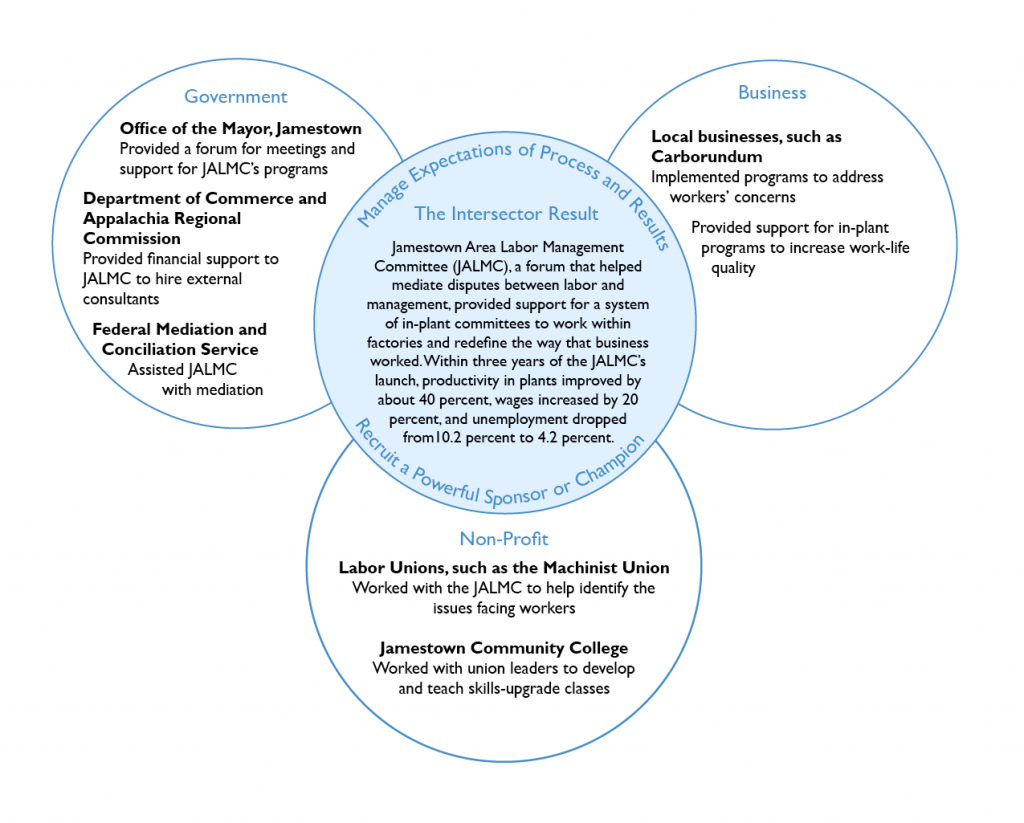 Stan served as mayor of Jamestown in the early1970s, when the city’s economy was in downturn. As part of the effort to resolve ongoing disputes between labor and business in the city, Stan brought in John from Wharton Business School to help expand the JALMC’s activities into individual plants. Stan’s understanding of the local community and political experience complemented John’s practical and educational insights.

When Stan decided to run for mayor of Jamestown, he felt motivated to fix the failing economy and believed that the city needed to do more to resolve the labor issues to keep the situation from deteriorating even further. He was aware that, despite the political will to address the state of the Jamestown economy, a lack of effective execution kept Jamestown from moving forward. Stan ran for mayor realizing that the resources of this office would provide him with the tools to effectively give back to his community.

Stan was an integral part of the community in Jamestown; his father founded and ran a small manufacturing company there, which provided Stan with a tie to the local business community. When he ran for mayor, Stan’s network continued to expand as he gained the support of local unions. Having this connection served as an asset to the work he did with the JALMC; through connections such as Sam Nalbone, the City’s Ombudsman, Stan was able to reach out to influential labor leaders, business owners, and ultimately to bring in external consultants to help develop a system of managing the contentious labor situation in Jamestown. When John arrived in Jamestown, Stan’s support allowed him to plug into existing networks and relationships in the city. In addition to Stan’s network, John started building his own network of “progressive thinkers” and those outside the traditional business or labor communities, including Larry Carter of the Jamestown Community College, who helped orchestrate the skills development program. By surrounding himself with these networks, John was able to generate enough support and pressure to move forward in the face of resistance. John realized that, even if he was not able to convince one person on his own, his network could.

John worked at a small family-owned business in Philadelphia while attending classes at Wharton Business School, where he also worked as a research assistant to Dr. Eric Trist, who later recruited John to Jamestown. When John arrived in Jamestown and began touring local factories, he was familiar with the “job shop” style of manufacturing that was prevalent in the city; He knew the challenges facing businesses and the concerns of workers. Additionally, the experience of working in a small business while studying allowed him to see the overlap and disconnects between how business was executed and practiced in reality, compared to the theories he was studying with Dr. Trist. As a result, John had a pragmatic approach to problem solving. He realized that any solution would have to work both in practice and in theory if it was going to be accepted by all of the parties. The transformations he was making with the JALMC on the plant level would have to have some theoretical support behind them in order to be replicated or understood in a wider context.

Both Stan and John understood that getting involved in disputes between unions and management would be difficult. From his experience as a lawyer, Stan realized that any attempt to formalize the structure would only stall any progress and delay the efforts to mediate disputes. Additionally, through his experience with politics, Stan understood the importance of building trust in the negotiation process, and set up individual meetings with both sides before attempting to bring them both together. Meanwhile, John attended classes at Wharton Business School while also working his way through the ranks at a small family owned business. After experiencing management in a smaller business, John was recruited to Dupont where he excelled and was placed on a fast-track career path. However, his intellectual curiosity and desire to continue the innovative programs they were developing with the JALMC, brought him back to Jamestown. With his experience at a large company like Dupont, as well as his experience in a smaller business, John was able to navigate the interests of the unions, workers, management, and CEOs located in Jamestown. John and Stan’s combined understanding of how both labor and management would approach the formation of this committee allowed them to develop a roadmap and eliminate many of the potential roadblocks along the way.

To address the concerns of labor unions and business owners, Stan recruited a number of highly respected individuals both from within the community and from around the country. In particular, Stan relied on support from Joe Mason, the head of the Machinist Union, who was able to approach a number of difficult groups and communicate the importance of collaboration. Likewise, Joe trusted Stan’s judgment and helped integrate external consultants that came on as part of the JALMC’s programming. Stan’s reputation in Jamestown allowed him to begin unraveling years of hostility between the unions and management. His ability to draw leaders from either side, and the progress he made in changing the culture of distrust between labor and management, helped pave the way for John’s team to sell the idea of establishing committees at the plant level.

Stan realized that the biggest challenge for Jamestown’s economy would be overcoming the image of a “strike-happy city” and showing that the city was taking steps to mediate the relationship between labor and business. This is how Stan framed the JALMC as he began approaching leaders from both sides – it would be a forum for mediating disputes, which is something both sides could agree on. Stan understood that transforming the image of Jamestown required participation from both sides – if one side refused to get involved, the damage to Jamestown’s reputation would be irreversible. His ability to communicate this fact to both sides, and to unify leaders on the need for this type of structure, was the first step in solving the underlying issues in the way business was being done in Jamestown.

Considering the detrimental impact years of miscommunication had on the economy in Jamestown, building trust and respect was one of the most important elements of the relationship. Before the establishment of the JALMC, there was almost a complete breakdown of communication between the unions and management. Each side blamed the other for the deteriorating economic situation, and the lack of communication fueled rumors that continued the cycle. In order to overcome this barrier, Stan met with leaders from both sides individually to hear their complaints and understand their concerns. Using his office as a neutral meeting ground for both sides, and serving as an impartial mediator, Stan created an environment for open, honest communication between labor and business leaders.

Both Stan and John realized the limitations of the “chamber of commerce” model of the JALMC Board of Directors. In order to reach their goals of restructuring business in Jamestown and improving in-plant productivity, they needed to counteract the top down approach with a grassroots effort. To that end, both men insisted on an informal, voluntary structure that combined the influence of the members of the Board with the insights of those in the factory who understand the reality of the challenges facing managers and workers on a daily basis. Additionally, by maintaining an informal and voluntary structure of participation for the members, both Stan and John avoided getting caught up in details and negotiations that could have derailed the process before it even began.

The in-plant committees were largely under John’s direction, in collaboration with Bob Keidel. To maintain the momentum of the JALMC, John took a very strategic approach in identifying the areas in which workers would get involved. However, what he realized early on was that given the nature of the “job shop” system of manufacturing, there was an inherent disincentive for collaboration between managers and workers. One of the key challenges facing the plants was the lack of a feedback loop after jobs were completed. Rather than identifying the aspects of production that needed improvement, plants just focused on completed the next order. John realized that to improve productivity they would have to establish this type of organizational learning; there would have to be feedback from the employees. However, John also understood that there was an inherent disincentive for employees to participate in this process as increased efficiency generally resulted in lay-offs. In order to convince workers to communicate openly with managers on matters such as process efficiency and the bidding process, John and his team worked to transform the adversarial management structure in place and to develop a solution that would spread the gains evenly across management and labor.

In the mid-1970s, the Jamestown Area Labor Management Committee mediated disputes between labor and management in Jamestown, making several major accomplishments that reassured the city of its value. One symbolic victory was that Jamestown was named one of the country’s “All-American” cities by the National Civic League in 1973. Other, more tangible, victories were the sharp decline in unemployment from 10.2 percent to 4.2 percent, and the announcement that Cummins, one of the largest manufacturers in the country, was going to located in a large factory in Jamestown. Stan’s ability to bring together leaders from the unions and management and to build trust at the top levels, combined with John’s focus on engaging workers and his ability to identify solutions that were beneficial to workers and companies helped revive Jamestown’s economy. Within three years of the JALMC’s launch: