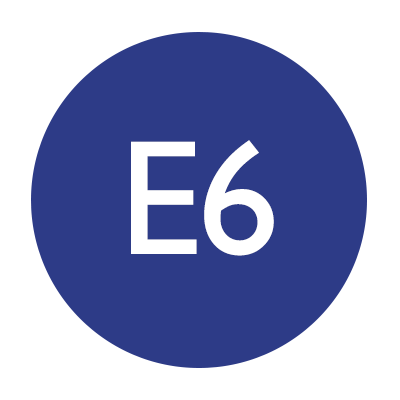 “By working together and adopting a common strategy and goals…we can make a vastly larger difference in our children’s lives than we ever could working separately.”— John Bennett, Director, Cradle to Career Initiative

Educational inequality resulting from wealth disparity leaves many students from low-income families unprepared for college or career. While this problem affects the entire nation, the 80-mile corridor between Aspen and Parachute in western Colorado exemplifies these inequality issues. In this region, over half of children are not ready for kindergarten, and only 73 percent of low-income youth graduate high school. Recognizing that this problem reached beyond the classroom, the Aspen Community Foundation (ACF), under the direction of Tamara Tormohlen, launched the Aspen to Parachute Cradle to Career Initiative (CCI) in 2012. CCI brings together the non-profit, public, and private sectors to pursue four high-level goals: Goal 1: All Children Should be Ready for Kindergarten; Goal 2: All Children Should Develop Social and Life Assets for Success and Happiness; Goal 3: All Children Should Succeed Academically; Goal 4: All Youth Should Graduate High School Ready for College and Career. With former Aspen Mayor John Bennett now serving as CCI’s Director, CCI has instituted community enrichment programs for 1,400 K-8 students, two pre-kindergarten “jumpstart” programs for at-risk children, and two mobile “preschools on wheels” reaching 120 underserved children. 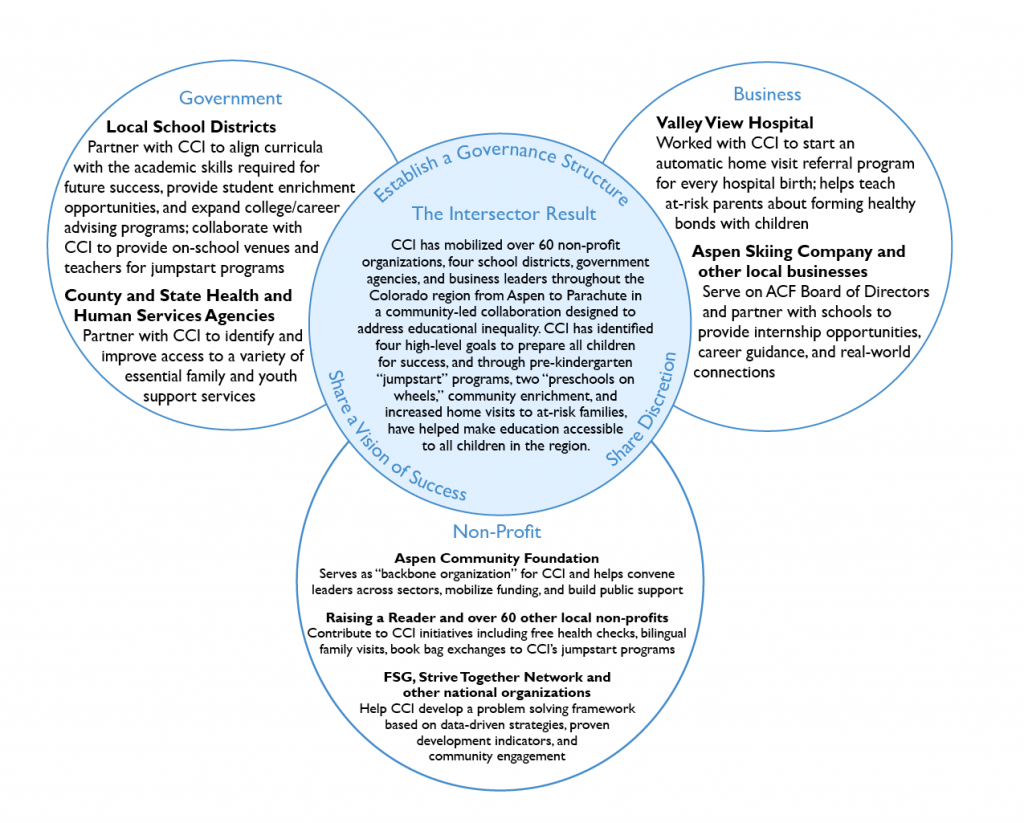 John is Cradle to Career Director for ACF. Between 1991 and 1999, he served four terms as Mayor of Aspen, Colorado. He began his career as a successful businessman, founding and operating a chain of restaurants in Colorado, Texas, and Mexico. He has also served as vice president of the Aspen Institute, president of For the Forest, executive director of the Cordoba Initiative, and as advisor to several additional non-profit organizations.

Having spent his entire career working for and across different sectors, John, like many members of the ACF leadership team, developed a keen understanding of the different motivations and values that drive the private, non-profit, and public spheres to become involved in an educational program like CCI. John explains that public schools recognize the limitations of working in isolation and seek to broaden community involvement and support; non-profits seek ways to increase the effectiveness and reach of their programs; business leaders understand the importance of quality education to community vitality and thus the future success of their own enterprises; and philanthropists seek to amplify the beneficial effects of their charitable contributions and want to see how their support helps achieve important social change. As Mayor of Aspen, John recognized the important role that collaboration and consensus building play in developing the long-term working relationships and community support necessary to successfully address social issues. This prior exposure to cross-sector collaboration enabled the ACF team and John to identify core common interests shared by community leaders, who may on the surface appear to have significant differences. By identifying these underlying commonalities, John and the ACF team helped break through barriers to progress while also establishing a solid platform for future CCI partnerships to flourish.

ACF is a highly respected community foundation with broad local networks and a valuable reputation for leadership. Likewise, John has served as a visible leader in the community for several decades. As four-term Mayor, he worked on a variety of diverse projects in the region from building affordable housing to improving transportation and protecting the environment. As vice president of the Aspen Institute, John organized a symposium that convened distinguished world leaders and Nobel Laureates to address the effects of globalization on humanity. Therefore, when developing CCI, ACF and John used their established relationships and professional legitimacy to convene a diverse group of stakeholders from the non-profit, public, and private sectors. ACF called upon its many non-profit partners and John reached out to his former colleagues to encourage them to consider ways for their respective organizations to become more involved in CCI. The result of this outreach contributed to the development of CCI’s plan to extend existing youth enrichment programs to previously underserved demographics and create new programs to fill gaps. Utilizing their integrated networks also allowed ACF and John to develop a clear understanding of how a community can come together to successfully address a widening youth achievement gap.

As Mayor, John learned how to use effective and persuasive communication to convene diverse stakeholders, inspire action, and reach consensus across multiple partners. Along with other experienced ACF leaders, John employed these same communication skills with CCI to attract multiple partners through a well-organized slide show presentation that highlighted the region’s educational shortcomings, detailed CCI’s comprehensive collective impact strategy, and thoroughly expressed the benefits of cross-sector collaboration. By appealing to the goodwill of the community with a well-prepared presentation, ACF successfully convened approximately 100 cross-sector community leaders from the 80-mile region stretching from Aspen to Parachute. John and the ACF team further maintained interest in CCI and encouraged consensus building by maintaining a strong sense of direct communication with community leaders. If a member of the ACF team sensed an unspoken disagreement amongst one or more of the action team’s members, John or another team member would directly contact them after the meeting to discuss their concerns. This type of communication greatly contributed to the early success of CCI.

In his career in both business and public office, John faced conflicting needs on a regular basis. As Mayor of Aspen, his ability to reconcile these conflicting needs enabled him to address important social issues like the need for affordable housing during a time when vacation homes made up 70 percent of the city’s private residences. John managed to address a variety of cultural, social, and environmental issues while still producing an annual budget surplus as mayor. John has always had an overarching desire to create public good, and it shows in his long career of public and non-profit service. As a result, when ACF approached John about serving as the Director of CCI, John accepted because he recognized how his cross-sector experience and ability to balance conflicting needs could benefit the collaborative undertakings of CCI. Despite being semi-retired at the time, John not only saw the need to help build youth success in the region, but also saw a way to address the region’s widening income gap, which threatened the future integrity of the region’s communities.

For over 30 years, ACF has supported important social missions through grants to non-profits in the region. With the issue of educational inequality, ACF decided to take a more proactive approach with CCI. ACF recognized that in order for CCI to achieve sustainable progress, ACF needed nearly 100 local leaders from diverse backgrounds to combine their efforts and resources into a unified action plan. Tamara realized that such a complicated endeavor required a clear governance structure that encouraged participation, promoted transparency, held members accountable, and created a shared community vision. To achieve this, ACF initiated monthly roundtable discussions as a way to incorporate all participants. Seating everyone in a circle encouraged consensus building while ensuring that everyone at the roundtable had an opportunity to contribute. If, however, the group failed to reach a consensus on a particular topic, the group would have a simple vote where members could either show approval with a thumbs up, express concern or ambivalence with a sideways thumb, or express disapproval with a thumbs down. If anyone voted against a motion, the group continued discussions on the topic until everyone at the roundtable either reached a consensus or at least voted with a sideways thumb. Eventually these community roundtables evolved into four self-selected action teams focused on the four high-level goals of CCI. Each action team had three community co-chairs and followed the same roundtable meeting and voting structure.

ACF leaders like Tamara and eventually John facilitated early CCI roundtable discussions by both introducing and concluding each meeting. However, when the larger community roundtable divided into action teams, each action team appointed three members of the community as co-chairs to lead each month’s discussion. Thus, ACF allocated decision-making authority and implementation to members of the community with issue-specific expertise. CCI participants also voluntarily chose which area of the initiative they wanted to focus on, and therefore which action team they wanted to participate in. This ensured that everyone with a sector-specific stake in the planning process, like a local business’s interest in finding career-ready employees, had a distinct voice in the action team’s final outcome. An example of this shared decision-making occurred when the action team dedicated to preparing children for kindergarten developed a plan to make home visit referrals an automatic part of all new births at the Valley View Hospital. Prior to CCI’s involvement, home visit groups had difficultly identifying and helping mothers with multiple risk factors because of privacy concerns with the hospital revealing patient information. As a result, this often left mothers in the greatest need of assistance without additional support. To remedy this problem, CCI united representatives from the hospital, home visit groups, and community to develop the logistics for an automatic home visit referral program. This enabled the hospital and home visit groups to develop a practical solution to their communication barrier, while also giving decision-making authority to the organizations with the functional competency to execute the program. In addition to benefiting the overall strength of the collaboration’s goals, this process of shared discretion also lead to greater buy-in from community members who could see that their direct involvement with CCI played a significant role in achieving positive outcomes.

ACF leaders designed CCI meetings to encourage consensus building in an open environment. In everything from sitting at a round table to having community peers co-chair discussions, Tamara wanted each member to feel comfortable about contributing their unique or differing opinions to the discussion. This transparency and commitment to consensus building helped strengthen CCI when the action team dedicated to preparing high-school graduates for college and careers encountered an internal disagreement with regards to what constituted “college and career readiness.” Despite occurring in the early developmental stages of CCI, ACF leaders and the rest of the action team had the foresight to slow down their progress until the team could incorporate the perspectives of all 20 participating members and fully agree upon the resulting action plan. Through actively acknowledging everyone’s viewpoint, the action team created a common cross-sector understanding of the problem, which in turn promoted group trust, encouraged innovation, and supported a long-term collaborative relationship.

The first several months of the collaboration focused on reaching a consensus about the four high-level goals of CCI, desired outcomes, and measurable indicators of success. Once members of the larger community roundtable developed a baseline for the mission and priorities of the collaboration, the self-selected action teams created both short-term and long-term collaborative targets to jumpstart progress towards educational equality in the region. ACF then published the four high-level goals along with the collaborator’s desired outcomes, rationale for action, a list of general progress indicators, and a list of key action targets into a comprehensive community action plan. This action plan serves as the common link holding stakeholders together while providing a guide for future action and a means for consistently measuring results.