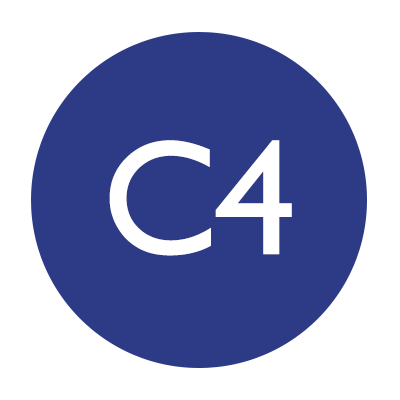 “What really energized me and brought me into the fold of doing this work was in the very early days…working with the community members, seeing their enthusiasm, their drive, and their commitment to making their community a better place.”– Mark Mead, Senior Urban Forester

In 1994 the City of Seattle and the Parks Department began to notice something wrong with trees in city parks. Research found that Seattle’s 2,500 acres of forested city parks were at risk from invasive plants such as English Ivy, Himalayan blackberry and bindweed. In 2004, experts projected that within 20 years about 70 percent of Seattle’s forested parkland trees would be dead. Previously, park-goers removed invasive species on their own, while non-profit and government organizations likewise worked independently. Rather than helping the problem, however, these piecemeal efforts placed an undue strain on the city’s existing resources. In order to save the parks, a shared effort between community members, experts in forestry, and the departments that held park resources was necessary. In 2004, the Green Seattle Partnership was formed, with the aim of arming citizens to help the city’s trees in partnership with the Department of Parks, Public Utilities and the Office of Sustainability and Environment. Under the leadership of Mark Mead, Senior Urban Forester, the Partnership created a 20-year strategic plan to sustain Seattle’s forested parks. Green Seattle Partnership is now the largest urban forest restoration project in the country. Mark’s use of agents across all sectors connected to the issue, and mobilizing community members to volunteer 500,000 hours by 2013 to the reforestation program, have put the Green Seattle Partnership in place to achieve their goal of planting 500,000 new trees by 2025. 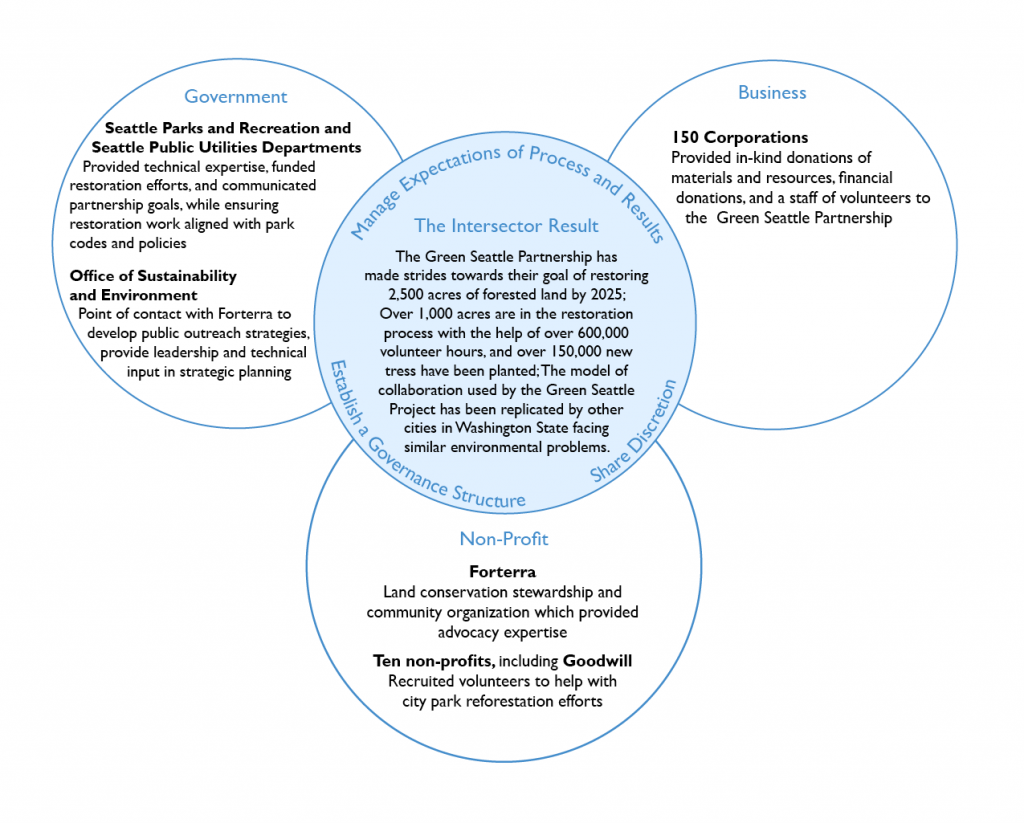 Since joining Seattle Parks and Recreation, Mark has partnered with experts in the field, non-profits, and community members to address forestry issues across the city. Drawing from past work in Utility Vegetation Management, Mark applied his experience as a strategist to create a sustainable model for healing Seattle’s forested parks. As leader of this collaborative effort, Mark committed to ensuring that the organization had enough resources, a motivated community to work with, and the appropriate scientific knowledge to effect lasting change.

Mark reached out to Pieter Bohen of Forterra, and formerly of Earthcorps, who shared his desire to improve the environment while working in a different sector. Pieter’s organization, Earthcorps, worked to train environmental leaders while Mark created a program that required the individuals Pieter was training. Pieter’s move to Forterra, with its vision of regional sustainability, created an opportunity for collaboration. Their shared goal catalyzed the formation of Green Seattle Partnership. Mark worked with Pieter to find where their organizations overlapped on vision, and shared resources, and used that knowledge to convince other leaders to advance the Green Seattle Partnership.

Mark cites “developing a corporate attitude” as an important phase of his career. He used his previous experience in utility vegetation management to develop a strategy to reforest the damaged areas. Mark used managerial skills earned in the corporate world and forestry jobs to help him in his role with the Green Seattle Partnership, including flexibility, perseverance, and ability to clearly articulate technical solutions. Part of that attitude was the ability to demonstrate the value of the work both to funders and the community. He also knew how to negotiate with contractors, upper management, and other leaders, a skill that proved integral in the early stages of the Green Seattle Partnership, as its leaders hammered out the details of the partnership and the work that would be done over the 20-year plan. Mark’s ability to determine the dollar costs of the problem was an asset to the Green Seattle Partnership in the beginning stages of their planning.

At the start of his career, Mark worked on drafting an Environmental Impact Statement for the creation of a recreational area in accordance with the State Environmental Protection Act (SEPA) and the National Environmental Protection Act (NEPA). Throughout his work, Mark mediated the needs of city leaders; Mark’s extensive knowledge of forestry prepared him to convey some of the more technical aspects of the work that needed to be accomplished to lay audiences. He likewise learned of the inner politics of city departments, and became adept at the back and forth required to secure funding from government organizations. He was unwavering in his demands for the Partnership, and even risked his position to argue for the benefit of the project’s strategic plan. Mark also understood the social motivations of non-profits and developed the context and resources that helped staff member Chukundi Salisbury create a unique partnership with Goodwill, in which Green Seattle Partnership provided funding for their projects and Goodwill recruited youth to help with reforestation efforts. He also knew from his work in vegetation management what drove community members to improve their environment; he used this knowledge to inspire the Forest Stewards by appealing to their interests, stressing the importance of their role in the reforestation efforts and giving them a say in the future of the parks.

Mark knew that he wanted to work with multiple stakeholders to enhance the community. Over the course of his career, he showed flexibility by taking on various positions at different levels, at times even accepting part-time positions so that he could build credibility in the field. Mark worked fighting forest fires, laying out acres of forest harvest and planting, as a naturalist, a parks planner, and a utility forester, both as an independent contractor and as a public employee. This diverse experience supplied the leadership skills he used during the creation of Green Seattle Partnership. While working for electric utilities, Mark diagnosed problems and visualized long-term solutions. He developed and defended sound planning, laying down the foundational concepts of the Partnership. His willingness to passionately work towards making a positive change on the environment led to his leadership role, and he has respectfully, publicly, corrected or contradicted officials when necessary. Early on in his time with Seattle Parks, he led an effort to seek restitution from a US Deputy Supreme Court Judge who had cut down 100 trees to improve his view, gaining $500,000 toward forest restoration.

Using an extensive inventory of trees created by botanists hired by a donor, the collaborators of Green Seattle Partnership developed a plan to evaluate the entire span of the Seattle’s forested lands. Though there were competing ideas within the group, after six months they were able to agree upon a common value and threat ratio. At times, third-party experts on issues such as technical forestry and volunteer recruitment came in to lend specific expertise. The group defined the value as the amount of native trees and plants on site at the time and the threat as the amount of invasive species covering the trees onsite. They used this value and threat to develop a ratio, which was then used to estimate the cost of healing those acres and creating sustainable long term maintenance costs to determine the actual cost of conservation efforts. The inventory information of all the trees in the area was then used to create nine sub-categories, based on where in the value to threat spectrum they fell; this became known as the Tree-iage Model. The Tree-iage Model estimated a cost and management strategy for each area, and became a method of conveying the information simply.

The initial evaluation of the problem with Seattle’s forested areas, and the subsequent plan for reforestation, was the decision of 12 managerial staff members from four different groups within the partnership: Forterra, Parks and Recreation, Seattle Public Utilities, and the Office of Sustainability and Environment. Their decision-making during this process became the foundation of the Green Seattle Partnership’s work. The Partnership then established a formal decision-making process that gave responsibility to various tasks based on which partner held subject matter expertise and appropriate resources. For example, Seattle Public Utilities doesn’t work on forested lands within Seattle, but they maintain control of the creeks near the parks. When the task of addressing monitoring storm water retention in the forested areas arose, Public Utilities had the best resources and were called on to execute the plan.

Initially, all aspects of the projects were managed between Forterra and the City of Seattle. The Executive Council of Green Seattle Partnership is made up of members drawn from each of the four entities. This nine member council contains: Forterra’s President or a designee, two Forterra representatives appointed by its President, the Director of OSE or a designee, the Director of SPU or a designee, the Superintendent of Parks or a designee, and three at-large members appointed by the Mayor. The Executive Team has expanded to include two members representing non-profit partners and a citizen at large. Members are in constant communication with each other, and the Chairperson of the Executive Council of Green Seattle Partnership is rotated every two years. The executive team focuses primarily on funding strategies, including securing funding from a diverse pool. There is also a managerial team, which focuses on allocating resources and overseeing the necessary reforestation work. Field level members are responsible for making on-the-spot decisions about how to complete reforestation projects, such as what are the best resources to use, how they will be delivered to the site, and where the volunteers will be coming from.

Mayor Greg Nickels is a good friend of Forterra’s Chief Executive Officer, Gene Duvernoy. Mayor Nickles helped create the regional mission for Forterra: “Creating great communities and conserving great lands.” Known for encouraging the “greening” of Seattle and the nationwide Mayor’s Climate Initiative, he signed the Green Seattle Partnership into existence, creating a memorandum of agreement which outline the responsibilities of all the entities involved. The Mayor was responsible for appointing members of the Seattle Green Partnership’s Executive Council.

Green Seattle Partnership set an ultimate goal of creating health and sustainability for 2,500 acres of Seattle’s parks by 2025. Within that overarching goal, they have identified plans and individual actions that will be taken through four phases of reforestation model. This Urban Forest Sustainability Model outlines goals for developing resources, working with community members, addressing problems, and completing the work. In addition, the Partnership constantly monitors the number of volunteers working for the project and keeps track of volunteer hours.

Green Seattle Partnership successfully created a diverse program that unites community members, non-profits, and government departments to help save Seattle’s forested parks. The Partnership continues to secure the funding it needs from a wide range of businesses, and uses over 10,000 volunteers and community workers annually. The success of the Green Seattle Partnership’s program has provided a template for a city-wide Urban Forest Stewardship Plan adopted by the City Council and Mayor. In addition, the model and the Partnership’s strategies have been used in five other cities throughout Washington state to accomplish similar reforestation efforts. Green Seattle Partnership continues to make progress on their plan to have restored 2,500 acres of forested land by 2025, including: