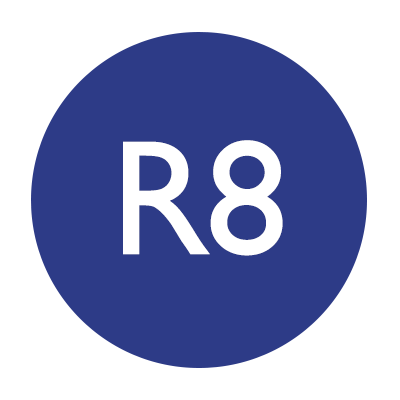 “When you look at the mission of Gang Reduction and Youth Development, and realize how impossible it is, then you look at what all of us together created, it is truly astounding.”— Connie Rice, Co-Director, The Advancement Project

After spending $25 billion over 30 years fighting a “war on gangs,” Los Angeles gang participation and violence had mushroomed. In 2007, Los Angeles had more than 700 individual gangs with 40,000 members; nearly 75 percent of all youth gang homicides in the state of California occurred in Los Angeles County. In response to the crisis, Constance (Connie) Rice, co-director of the Advancement Project, a public policy change organization focused on civil rights issues, spearheaded the development of a 108-page report providing a framework for how the city should approach gang reduction. The assessment, A Call to Action: A Case for a Comprehensive Solution to LA’s Gang Violence Epidemic, included input from 47 subject matter experts and prompted the creation of the Gang Reduction and Youth Development (GRYD) office. This collaborative program implements the city’s new comprehensive, community-building approach to gangs where police officers work hand-in-hand with residents to clean up neighborhoods and prevent violence. Seven years after the initial report, GRYD continues to discourage gang participation by offering productive alternatives to gang culture and helping former gang members transition into contributing members of society, resulting in a significant drop in gang violence in target neighborhoods across Los Angeles. 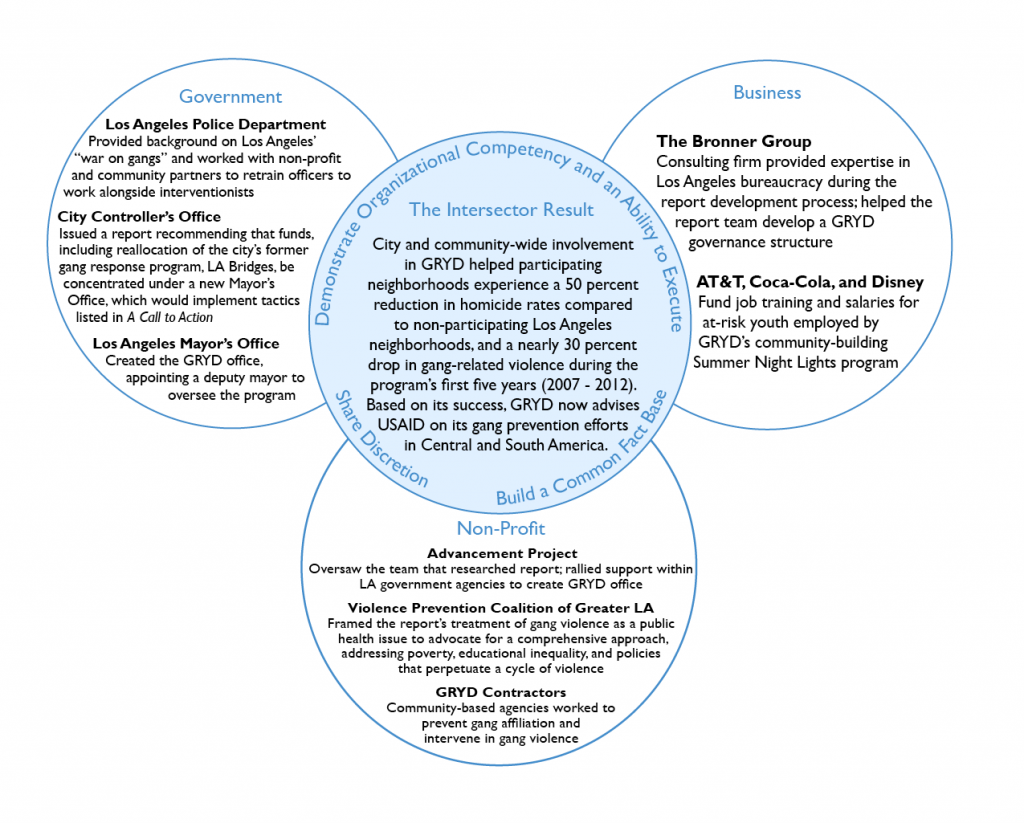 Connie’s experience as a civil rights lawyer helped affect lasting change in how Los Angeles approached its gang issues. Her strong moral compass, professional partnerships, and understanding of political motivations guided her as she re-framed the city’s focus from a war on gangs into a collaborative effort to rebuild communities.

Knowing she would need power and credibility to bring about change, Connie worked to achieve the highest possible honors at New York University’s law school before pursuing a social change-focused career at NAACP’s Legal Defense Fund (LDF) in Los Angeles. After years winning cases, Connie recognized that while she was winning the “war” of litigation, she was not “changing how cops treated poor black kids and poor Latino kids.” She resolved to shift toward “hearts and minds work” in order to “change how officers feel about these communities.” She left the LDF to start a new law firm with three long-term legal allies, Molly Munger, Penda Hair, and Steve English, along with a complementary non-profit organization that focuses on systemic community transformation, the Advancement Project. Connie explained: “Hearts and minds work requires persuasion, influence and love. I resigned myself to the fact that I was going to have to learn to love these cops if I was ever going to get them to follow me in change.”

During the years spent as one of the nation’s leading civil rights attorneys, Connie built a network of powerful contacts, both among those who had worked with her to win cases and at institutions she had sued. Recognizing her desire to reform Los Angeles’ gang culture, she approached City Council Member Martin Ludlow, who led nine months of community hearings on gang violence, which led to a request for proposal for a report that would assess and benchmark the city’s gang response, and design a blueprint for improvement. Connie then corralled former contacts and top subject-matter experts to form the team behind the Advancement Project’s proposal. Because she recognized that high potential for failure when trying to address gang violence made the issue “fraught with political danger” for elected officials, Connie “lined up every law enforcement official in the state to endorse” the report, including Los Angeles County Sheriff Lee Baca, Chief of Los Angeles Police Bill Bratton, Los Angeles City Attorney Rocky Delgadillo, Los Angeles County District Attorney Steve Cooley and Attorney General of California Jerry Brown. This tactic allowed her to “borrow the power” of those in official positions, using it to sway politicians to tackle the “third rail” issue of gang violence.

Connie found her calling when she was young, citing a meeting with the son of a migrant farm worker in Arizona as opening her eyes to the nature of race and class divisions, ultimately paving the way for her civil rights career. After earning a law degree, she went on to win landmark cases with the NAACP’s Legal Defense and Education Fund (LDF). Connie recognized that though her work with LDF helped many marginalized clients, their “kids were getting shot when they walked to school because there were turf wars between gangs.” Her lifelong commitment to making the world more just, combined with her background in law, led Connie to take on Los Angeles’ war on gangs.

Decades spent practicing “impact legislation,” or class action lawsuits to fix flawed policy, in Los Angeles gave Connie a firm understanding of how to elicit support from each sector. Knowing that the new department would need a strong governance structure to succeed, Connie hired an expert in Los Angeles bureaucracy from a top consulting firm to help design an entity that would fit within the existing city infrastructure and regulatory environment. She understood that government budgets can be fickle, so she sought to build long-term viability for the program and garnered business support from The Los Angeles Chamber of Commerce with a focus on job creation. Connie’s understanding of the need to navigate political impediments helped her recognize that Mayor Villaraigosa would need to view his decision to support the program as a potential political advantage, so she gently reminded him that “dead kids don’t learn.”

In the early stages of the collaboration, Connie and her partner Susan Lee organized subject matter experts into seven working groups, each focusing on one issue such as education, public safety or demographics. Each group was given a set of questions to work through, and determined and produced their own deliverables. For instance, the governance work group, made up of business sector representatives who consulted with the public sector, produced a governance structure for GRYD. Connie and Susan combined the individual deliverables into a “coherent whole.” Since GRYD was created, the LAPD has worked with members of the nonprofit gang intervention community to prevent retaliatory shootings and shifted its policing methods from violence suppression to community building. Nonprofit partners now compete in a competitive proposal process to win contracts with the GRYD office to provide services like prevention efforts, family case management and violence intervention services within the target communities. Businesses like Disney, along with private foundations, fund training and salary for youth who are hired to help implement GRYD’s Summer Night Lights program, which keep parks open later during summer months for family friendly events in an effort to curb violence and build community.

During drafting of A Call to Action, experts “couldn’t even agree on the definition of ‘gang.”18 Once empowered by the city to lead creation of the report, Connie assembled a team of 47 subject matter experts from government, business, and non-profits who had expertise in urban education, government structure, gang prevention, funding analysis, violence against women and community development. This group conducted hundreds of hours of research into the many causes and outcomes of gang violence, detailed in their 108-page report that levied more than 100 recommendations for action on Los Angeles. Connie appointed teams to conduct community forums that engaged residents and leaders in neighborhoods most impacted by gang violence, resulting in “communal intelligence” to ensure that the report’s recommendations would be relevant and successful.

Connie recognized that without a powerful supporter, her organization’s report might be buried in political inaction. Believing that “cops are always the power any time they are involved in an issue,” Connie sought an ally within the police department. Los Angeles Police Chief Bill Bratton proved to be the supporter Connie needed, calling a press conference to endorse the Advancement Project’s A Call to Action report. Bratton’s support and the flurry of media attention it created helped Connie appeal to Mayor Villaraigosa to begin supporting the issue. He eventually championed the collaboration, helping to stamp out governmental roadblocks to create GRYD and draw the public’s attention to the city’s new strategy for addressing gang violence.

After publicly supporting recommendations in A Call to Action, Mayor Villaraigosa threw his weight behind the program to create the new GRYD office. He appointed a new deputy mayor to oversee the city’s implementation of the report’s recommendations. Non-profit gang interventionist organizations, which championed the idea that the cycle of violence could be interrupted, now respond to every gang-related shooting and homicide in the GRYD zones, working with community members to diffuse tension and gather intelligence that can be used to help prevent further violence. LAPD’s Chief Bratton committed to change the culture of the department, assigning Deputy Chief Charlie Beck to work directly with the Advancement Project to oversee development of an academy that changed officer training and tactics to help them learn to work with gang intervention experts. Since implementing the new cooperative strategy, more than 80 percent of police officers have said that communication between the department and intervention workers have improved while community tension levels and gang retaliation have dropped.

A year after the Advancement Project won the contract to create A Call to Action, the GRYD Office was created to oversee implementation of the report’s recommendations. The office now oversees scores of contractors and violence prevention programs like the annual gun buy-back and Summer Night Lights (SNL), a public-private partnership that keeps 32 city parks open late with special community programming during summer months. In 2013, SNL was attended by 848,796 citizens, created jobs for 352 at-risk youth, and led to drops across all GRYD zones in serious gang-related crimes (34.4 percent), gang-related homicides (9.1 percent), shots fired (42.8 percent), victims shot (39.7 percent) and aggravated assaults (33.8 percent) through early August for all SNL locations combined. Since 2007, gang violence in Los Angeles has dropped dramatically: