Creating a Culture of Disaster Preparedness in San Francisco 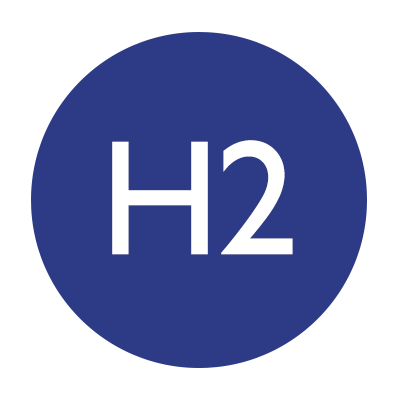 “Actual emergencies look more like people coming together than cities falling apart. SF72 is about prompting San Franciscans to get connected before an emergency so we can be that much better off when something happens.”— Rob Dudgeon, Deputy Director, San Francisco DEM

San Francisco and the Bay Area face a 62 percent chance of a large earthquake in the next 30 years. To prepare, San Francisco’s Department of Emergency Management (DEM) reviewed its disaster preparedness and recovery strategies. Rob Dudgeon, Deputy Director of DEM, realized that his agency needed to communicate with the public in a new way. Working with Alicia Johnson, DEM’s Resilience and Recovery Manager, San Francisco DEM hired IDEO, a design and innovation consultancy, to develop a new preparedness platform called SF72. Seventy-two represents the number of hours following a major emergency when people should be able to take care of themselves before help arrives. The website SF72.org, as well as outreach programs including presentations and in-person meetings, helped create a new culture of “positive preparedness” for residents, organizations, and businesses. Positive preparedness aims to show community members how to tap into their existing networks, using tools they already have to support each other after an emergency. SF72 encourages resilient behavior by providing a platform for people to connect. 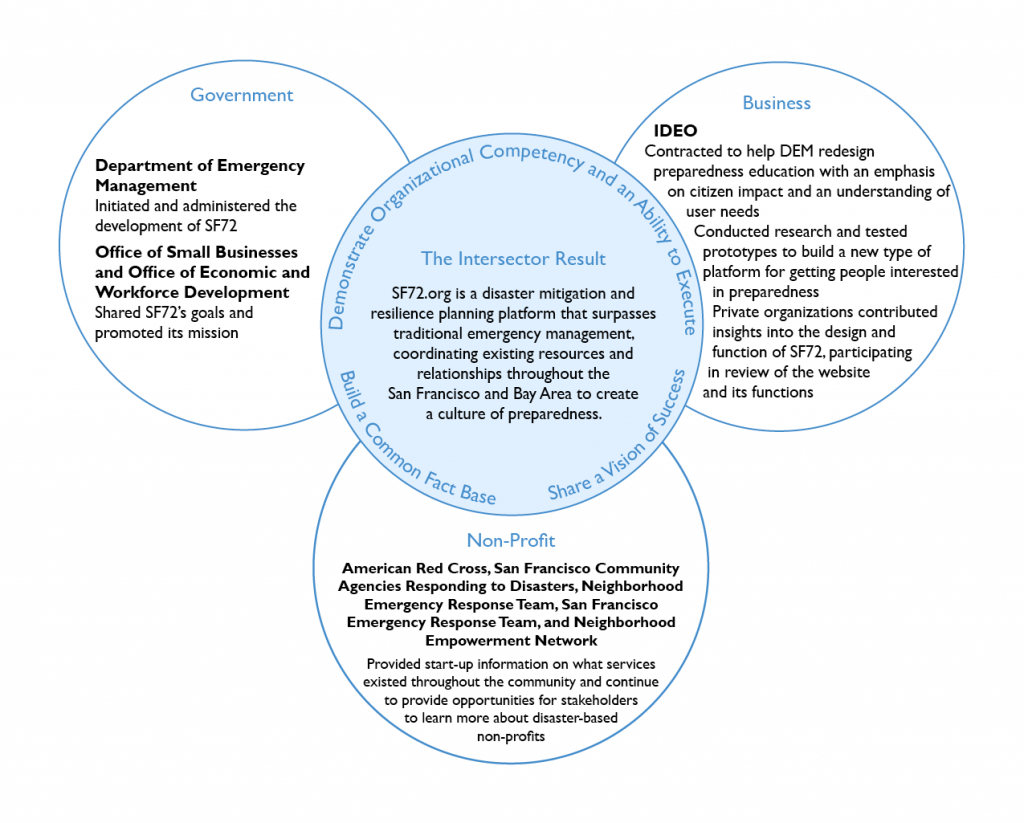 Rob has served as Deputy Director of San Francisco’s Department of Emergency Management since 2008, where he initiated the collaboration that led to the founding of SF72. His work on that initiative refined and rebranded outreach efforts to change public behavior, drawing on the competencies of non-governmental experts and recruiting outside talent. Alicia has served as the Resilience and Recovery Manager at the San Francisco Department of Emergency Management since 2011. She combined her experience in emergency management and communications with her technology expertise to guide the development of SF72.

Prior to his appointment as Deputy Director of San Francisco’s DEM, Rob worked for many years as a first responder. As an EMT, he gained firsthand knowledge of emergency medical procedure in the field, and rose through the ranks to a supervisory position before recruitment to the San Francisco Department of Health on the regulatory side of Emergency Medical Services. In 2005, he joined the office of Emergency Services as a medical planner, before moving to a managerial role in the operations division. Rob’s deep knowledge both of emergency services and of governmental operations taught him both what the public sector does well, and where improvements could be made.

Rob knew that traditional crisis preparedness messages inspire fear rather than encourage conversation and action. His experience in government communications, and with government websites in particular, led him to believe that he would need to create a new type of emergency preparedness messaging. Recognizing the limitations of his own sector forced Rob to work across sectors effectively. He decided to look for communication experts in other sectors – such as IDEO – in order to develop an innovative, user-tested model to could improve San Francisco’s disaster preparedness education. Before Alicia worked in municipal level government positions, she spent her formative years behind the counter of her parents’ retail store, learning that a successful business provides solidity, continuity, and return on investment for its stakeholders. That helped her see SF72 from the perspective of her business partners, and framed emergency preparedness and risk management matters in terms of economic viability. Both Alicia and Rob understood the role of non-profits from working with them day in and day out.

Alicia credits openness to new ideas as a key factor in the development of her career. While Alicia initially wanted to work in public relations and public education, emergency management gave her the opportunity to connect with partners and stakeholders in a dynamic way. She met DEM’s Deputy Director, Rob Dudgeon, at a conference in Salt Lake City where he admired her use of technology in disaster preparedness, and told her that he might have a position for her. Alicia has been working with Rob at the DEM since 2011.

Rob developed crucial analytical and project management skills through his many roles in emergency response and management. In each of his government positions, Rob sought to define problems, understand shortcomings, and improve efficiencies. In the planning stages of SF72, he looked to the environmental movement as a successful example of changing cultural norms by promoting public interest and conversation, and he quickly grasped the opportunities of the shifting media landscape. In 2007, when a small oil spill in San Francisco Bay generated massive public interest in the blogosphere, Rob realized the potential of new media, and sought out Alicia as his new Resilience and Recovery Management Manager for her ability to combine programmatic intelligence with technological savvy. Alicia has extensive technical capability and understanding of the versatility of social media platforms; she won first place at TransMedia Startup Weekend for her role in the development of iPolicy, a tool that allows residents to connect with local government using social media.

The Resilience and Recovery Management team began by determining the extant reach of preparedness education in the San Francisco and Bay Area communities. By understanding how members of the community already thought about preparedness, they devised more efficient strategies to reach the under-prepared or uninformed. The team began working with academics to draft a set of key concepts and competencies on which to canvas public opinion. A key measure, they felt, was to define the term ‘resilience,’ since for them a culture of resilience was at the heart of positive preparedness. As they discussed their terminology with other government agencies and with non-governmental groups, however, what they found was that individuals defined ‘resilience’ differently depending on issue and audience. This revelation convinced the team that a ‘one-size-fits-all’ definition would be insufficient, so they developed an agile and finely nuanced platform to accurately survey and to serve the individual residents of San Francisco and the Bay Area. The process of simply defining the goal was a challenge, but essential to the process.

Rob and Alicia’s team decided that DEM needed to abandon the traditional model of emergency preparedness and collaborate with other sectors. They approached IDEO with a question: how could they motivate citizens who weren’t already aware of positive preparedness? To find an answer, IDEO initiated qualitative interviews with San Franciscans, and meetings with business and non-profit organizations, religious leaders, and community representatives. San Francisco DEM and IDEO held weekly meetings with each other to discuss and analyze what they were learning from residents. What they learned was that preparedness is not only about tools or supplies, but connections to other people. The team continually went back to test the technologies that DEM and IDEO developed. Representatives from every sector contributed to identifying the components that should be included in SF72. The result of the collaboration is a platform truly made for the people of San Francisco.

SF72’s ability to connect with representatives from all facets of San Francisco and the Bay Area was due largely to partnership with IDEO. IDEO’s foundational belief is that understanding user needs is crucial in designing any new service. The partnership with IDEO likewise helped Rob’s team to attract the business sector to the collaboration. In meetings between IDEO, DEM, and businesses, IDEO facilitated communication, helping DEM identify what was important to businesses in emergency preparedness.

Each sector’s importance is reflected in the design of the SF72 platform, which incorporates the needs and abilities of other organizations. IDEO’s qualitative interviews determined user needs, leading them to use social media platforms such as Facebook, Twitter, Instagram, and AirBNB. DEM regularly conducted outreach with businesses to show how individuals in the workplace could be more prepared. Those presentations grew out of feedback and suggestions of business representatives such as the Business Owners and Managers Association. DEM made sure that non-profits did not duplicate services provided by the government, thus positioning themselves as a resource in case of emergency; SF72 directs residents to existing services, such as CPR training provided by the Red Cross, rather than relying on individual organizations to so independently. SF72 integrates and enhances existing services and resources made available by each sector.

San Francisco’s DEM, IDEO, hundreds of business and non-profit organizations, and the city’s residents collaborated over a period of three years to create a new platform of education, outreach, and public information. SF72 serves as a community hub for emergency preparedness. On the website, visitors find videos of San Franciscans sharing stories about how to prepare for disasters, and learn how to connect with friends and neighbors. The “Connect” forum allows individuals and organizations to connect with other people in their community, and users are encouraged to pledge skills and resources such as generators and babysitting services. The mobile app includes a geo-track feature that allows users to find loved ones and establish meet-up spots during an emergency. A section of the website is dedicated to real-time information during an emergency, including crowd-sourced reports delivered via Twitter from residents, businesses, and non-profits, ranging from road blockages to available services. Businesses and non-profits can contribute to SF72.org; they can also access in-person education, including presentations and connections to resources, specifically for these organizations. SF72 officially launched in October 2013, receiving positive feedback from the resident, business, and non-profit communities.